In a few days I plan on starting this regiment to finish my Charles Gerard's brigade at Edgehill. Unfortunately, I am finding conflicting info. Some sources say it's white coats, other blue or red. I am leaning toward white coats myself. That said, I cannot for the life of me find any information on the regimental colours nor do any of the Flag dealers appear to have it either. I realize ECW information can be hit or miss but this particular regiment is driving me crazy... I was able to find a blog with the following colours but I am not sure how accurate it is. 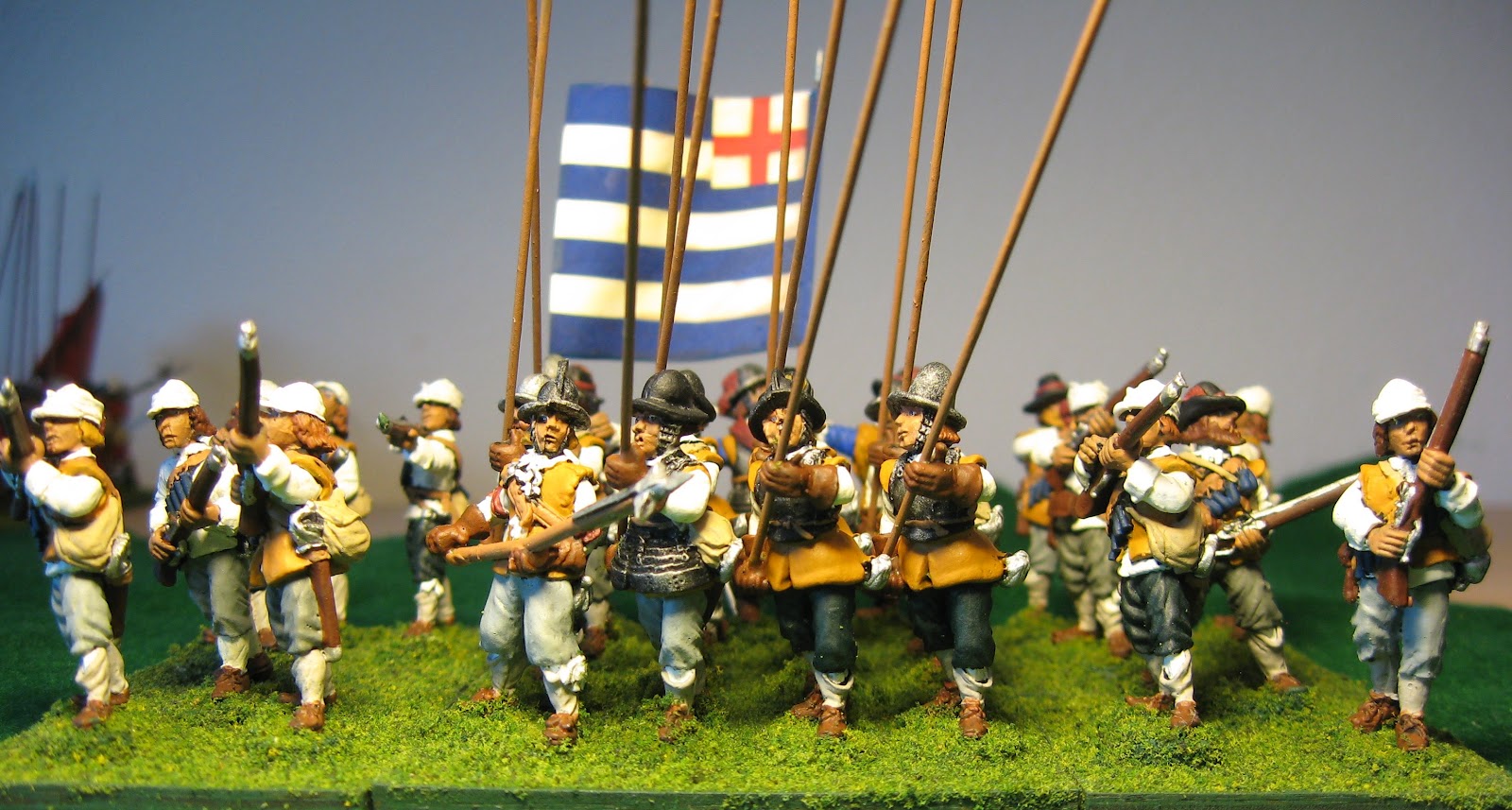 Anyway, if anyone with more expertise in this subject could point me in the right direction I would greatly appreciate it.
"As fate is inexorable, and not to be moved either with tears or reproaches, an excess of sorrow is as foolish as profuse laughter; while, on the other hand, not to mourn at all is insensibility."
- Lucius Annaeus Seneca
Top

Don't know about more expertise, but these are websites that I tend to go to for such information:-

I would consider the former more reliable than the latter, if there is a clash of data. In this case, the two are not necessarily incompatible, as many units had different uniforms over the course of the war. Very (very) few Royalist units had uniforms at Edgehill. The infantry in particular would have been wearing civilian clothing, almost entirely greys or browns (from rough-dyed or undyed wool); coloured garments would have been rare, and even they would be "greyed" or faded tones (note that black was a rich man's colour - cheap black dyes faded to brown or green very quickly). Headgear was mostly woollen caps or English bonnets - think Baldrick's headgear in the Tudor Blackadder series - for the rank-and-file, as even simple hats were quite expensive and beyond the budget of simple folk. No buff coats, other than the wealthier officers, and very little armour at this time.

The first real issue of uniforms to Royalist troops comes at Oxford in 1643, where the BCW Project website suggests red or blue "suits" for Dutton's regiment (usually, the only clothing issued - on either side - for most of the war was a coat; the Oxford Army got trousers and montero cap in the same colour, as well).

Dutton's regiment later became that of Stephen Hawkins, which I think is where the white coats come in (the Oxford uniform would have been red or blue as these were the only two colours of clothing issued there in 1643).

They may be able to help with flags etc.

Thank you, Ronin!
"As fate is inexorable, and not to be moved either with tears or reproaches, an excess of sorrow is as foolish as profuse laughter; while, on the other hand, not to mourn at all is insensibility."
- Lucius Annaeus Seneca
Top

Hi Daniel
Ronan has it right, from a trawl through my bookshelf.

Dutton's were at Edgehill, and their Colonel was Sir Ralph Dutton, Lt Col Stephen Hawkins. Hawkins took over the regiment around the turn of 1644, probably early spring of that year. The regiment were involved in the June/July in the defence of Greenland House near Hambleden in Buckinghamshire, part of the actions of the First siege of Oxford in that year. According to one source, it seems as though the reference to white coats dates from the September of 1644, and it's often apparently misquoted as being the case as far back as Edgehill.

As Ronan suggests, at Edgehill, many of the Royalist troops might have been in civilian kit. That said, the Duttons were apparently an extremely wealthy family from Gloucestershire, and his regiment was about 800 strong when he joined Charles at Nottingham. There's nothing wrong with having troops in white to start off with, therefore - simple woolen uniforms from a wealthy colonel seems perfectly ok in the absence of any hard evidence!

As for later, it seems as though the regiment was at Bristol, Newbury 1, and likely the Relief of Banbury in 1644. Work on the new coats for the Oxford Army began in the January of 1643, and Duttons may have been in the main Royalist camp at Abingdon at that stage, so might have received some of the red or blue uniforms, before a later refit of white.

As for colours........ any body's guess! Yours look fine - stripey colours were used, a kick over from Tudor era stripey colours, popular with local and militia forces in later years right up to the time of the Civil wars.

Thank you, Andy!
"As fate is inexorable, and not to be moved either with tears or reproaches, an excess of sorrow is as foolish as profuse laughter; while, on the other hand, not to mourn at all is insensibility."
- Lucius Annaeus Seneca
Top

Here is a photo of the later Sir Stephen Hawkins Regiment as I pictured it:

Thank you, gents! I will post some pics once I have the unit painted.

"As fate is inexorable, and not to be moved either with tears or reproaches, an excess of sorrow is as foolish as profuse laughter; while, on the other hand, not to mourn at all is insensibility."
- Lucius Annaeus Seneca
Top
Post Reply
7 posts • Page 1 of 1