A few questions on BLB3

Any questions relating to Beneath the Lily Banners rule system.
Post Reply
28 posts

.. but I would agree with the description.

The book log jam is finally cleared so here is the news:

1. Beneath the Lily Banners The War of Three Kings has gone to the printers. We will begin taking pre-orders on February 1 for delivery we hope in Week 1 March. The book is hardback with 184 pages. It will retail at £30.00
2. We are currently working on the formatting of 8 new pdfs for the Williamite Army at Aughrim together with another for the Protestant Armies of the North West in 1688-1689 period. In addition pdfs covering the Jacobite Army at Aughrim, Marlborough's Cork & Kinsale Expedition and the Swedish Infantry at Poltava are all work in progress and should be finished in February.
3. Scenario books for the campaigns in Ireland have moved right back up to the front of the queue. These will have scenarios for Donnybrook and BLB WTK - there are likely to be 3-5 books all in the style of WTK. Currently text is being reviewed to accommodate WTK.
4. UnIform guides currently available in pdf will be available in book form over the next few months.
5. Donnybrook Dark is edging towards commercial reality.
6. We are currently discussing Flanders NYW and WSS books.

We have not been hibernating over the winter counting our nuts!

Any possibles dates when those new PDFs will be available?

Also this will probably come off as pretty amateur, frequently asked and newbie question

while I'm interested in the LOA period for wargaming, some of research I have done (mostly using the wiki and John A Lynn's Osprey work) on both the Nine years war in Europe and Ireland I find it difficult to enough substance for it to work compared to say the WSS. It seems to be mostly sieges with very few battalion battles and too few regiment battles whereas Ireland has more of this but again lasting for only about three years.

I'm probably misjudging this all completely but I wouldn't mind knowing what possibilities there are for various smaller engagements within the historical campaigns for both Ireland and Europe using BLB.
No man's knowledge here can go beyond his experience
- John Locke
Top

We have about 50 scenarios in Ireland just for 1689, designed for BLB and Donnybrook, based on historical engagements. Similar lists are being worked up for 1690+. Barry has done a ton of work in this area, as well as unit information and uniform guides. I understand your reticence, but when we’re finished you will have access to one of the most detailed accounts of the war in Ireland that has been compiled...

Hang in there. 2018 is going to see lots of new products...
Clarence
http://www.quindiastudios.blogspot.com

Will some of those scenarios be available in the main rule book itself?

Also out of interest is it plausible to have some William's English, Scottish and Dutch regiments from the war in Ireland also serving in the Low Countries?
No man's knowledge here can go beyond his experience
- John Locke
Top

There is only one scenario in the main book. The Aughrim uniform guides will be out next and the scenario books hopefully by Summer. I'll pick a handful to preview over the next few months. There are a few presented on the blog already as playtests...

...and the Battle of Pennyburn Mill, also from one of the books, is featured in numerous posts throughout the blog as we ran this at Historicon a couple of years ago.

Yes, many of William's troops served in both Ireland and the Low Countries, though some changed their flags and uniforms over the course of the decade. The great thing about this period is many of your units can be used for different battalions with a flag swap.

For instance, just off the top of my head, Grey Coats and Red Cuffs at the Battle of the Boyne: 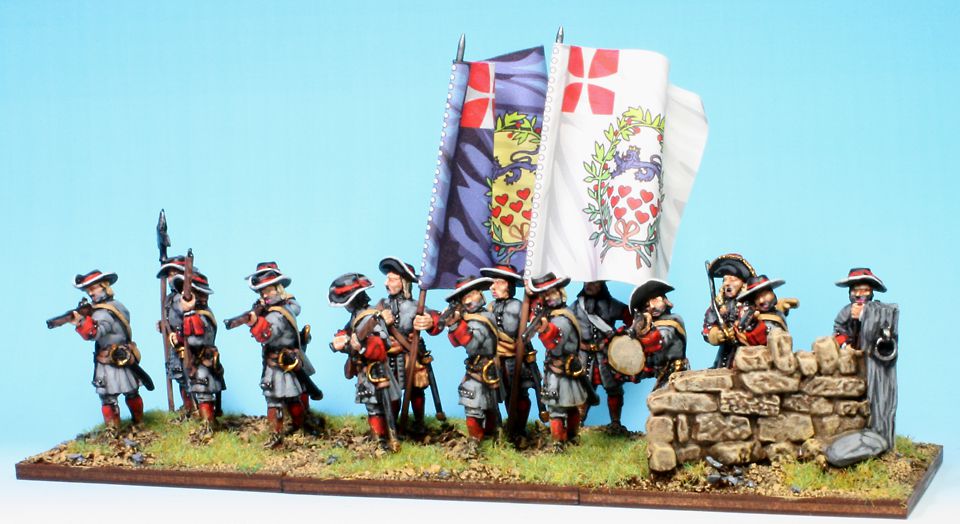 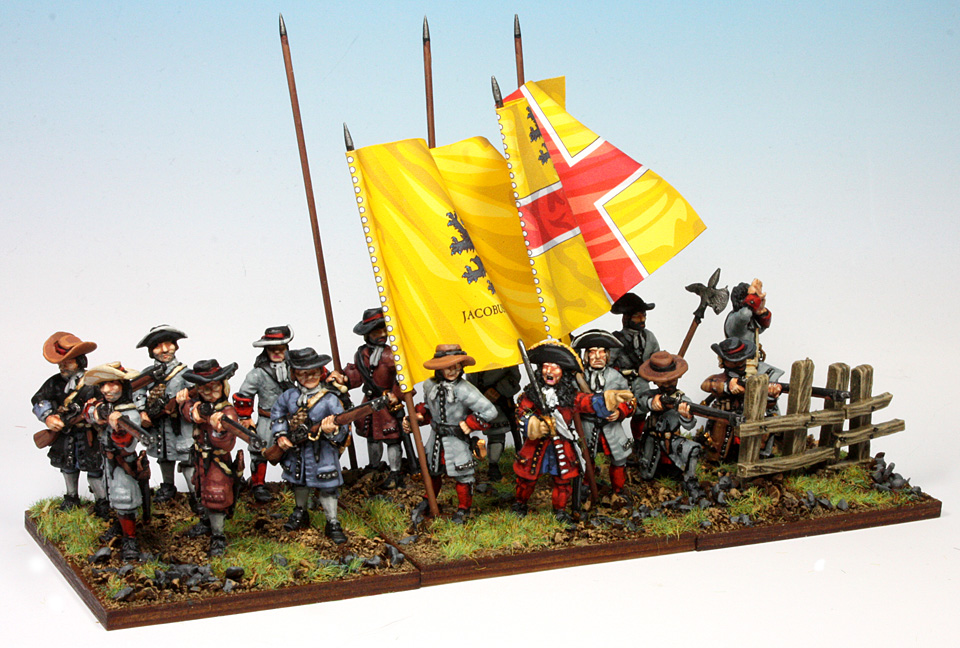 Now these units all have idiosyncrasies, different color vests or stockings for example, and coats could be various different shades of grey, but with the flag most people will overlook the fact that the trousers are the wrong color (MOST people). If you choose a light grey, you can probably get away with substituting for a unit in white coats (like Antrim's) as well. That's just one battle. There are some units like the Dutch Blue Guard and the Danish Foot Guard that have more distinct uniforms, but in general you can get away with quite a bit in this period.

Almost the entire Williamite Army which fought in Ireland shipped out to Flanders in 1692 and stayed there till 1697. About 10,000 Jacobites left Ireland in November 1691 to form an Irish Army in exile which fought both in Flanders and in Savoy/Northern Italy.

WSS most people know only about the big 4 but of course there were many, many other battles Friedlingen, Marsaglia Staffarda, Almanza etc etc.

The period is often known only in headline. The more you dig the more interesting it becomes.

barr7430 wrote: ↑
Fri Jan 26, 2018 1:20 pm
Almost the entire Williamite Army which fought in Ireland shipped out to Flanders in 1692 and stayed there till 1697. About 10,000 Jacobites left Ireland in November 1691 to form an Irish Army in exile which fought both in Flanders and in Savoy/Northern Italy.

WSS most people know only about the big 4 but of course there were many, many other battles Friedlingen, Marsaglia Staffarda, Almanza etc etc.

The period is often known only in headline. The more you dig the more interesting it becomes.

We are in the process of making this kind of info accessible to gamers in a format that is gamer-friendly.

Glad to see theres some flexibitly. The headline part is probably true as intially for me it just seemed to be mostly sieges and large oversized armies avioidng battle with each other.
No man's knowledge here can go beyond his experience
- John Locke
Top

I like the the idea of flexibility for changing standards although in 10mm minor details like leggings will be very minor.

Generally how many battalions of converged grenadiers would be available per side in average game?

Also are any of the Dutch regiments from The LOA period useable for the franco-Dutch war?
No man's knowledge here can go beyond his experience
- John Locke
Top

We recommend a typical table top force has a single unit of converged grenadiers, but certain scenarios or battles may account for more. It may depend on the theater or specific army as well as the tactic was not always employed. There's a discussion of grenadier battalions somewhere on this forum that a quick search should reveal...

In my personal collection, I aim for one stand per brigade of Foot. For small armies, my grenadiers might be only add up to a single stand and be relegated to a Forlorn Hope or other detachment (or left with their parent units), while in larger games I might use a converged grenadier battalion of two or three stands. That's just me, though, and not indicative of any historical practice!

The Franco-Dutch war is outside my area of knowledge, so I'll leave that for others!
Clarence
http://www.quindiastudios.blogspot.com

I was also wondering about the use of couriers. I haven't worked how they are used, are they necessary for the game to work or can they be an optional rule?

Is LOA planning on being at Salute this year? If so are there going to be any demo games on?
No man's knowledge here can go beyond his experience
- John Locke
Top

Couriers are a rule for changing orders in multi-player games. For instance, your initial battle plan as the C=in=C called for your right wing to hold a strategic position at all costs. Rules as written means the player for that command should defend his area. As the battle unfolds, the C-in-C discovers the right wing has repulsed all attacks and now the enemy on side is battered and shaken. To order the right wing to mount a counter attack, the C-in-C needs to send a courier to change the sub-commander’s role in the battle.

It is certainly an optional rule, but I like to use it even in smaller games, assigning each brigade a task and requiring the deployment of couriers to change them...
Clarence
http://www.quindiastudios.blogspot.com

If used should the number of couriers be based on the number of brigades?
No man's knowledge here can go beyond his experience
- John Locke
Top

The default number of couriers is one per C-in-C as it is unlikely you would need to change all of your elements’ orders in one turn! You could certainly adjust this to fit your own table...
Clarence
http://www.quindiastudios.blogspot.com

DHautpol wrote: ↑
Tue Jan 16, 2018 12:36 pm
I was prompted to move into this period by the fabulous figures in the Pendraken range.

To avoid the 'anaemic' looks suggested by Clarence, you will need to scale down the base sizes or the figures will be too spaced out, for want of a better expression. I worked on using two/thirds of the 15mm sizes suggested in BLB II and, as the sizes are variable, I drew various outlines on a sheet of paper to test the groupings to get a attractive density. I finally alighted on 25mm x 25mm for foot and 30mm x 30mm for horse.

A battalion comprises 2 bases of six musketeer/arquebusier figures for the 'wing' stands, a central stand with one officer, two colours, a drummer and two musketeer/arquebusier figures and a rear stand of five pikemen and one colour (I like flags). I purchase six additional colour bearers from Leon (although you could use the sergeant figure) and find that 3 packs of musketeer/arquebusiers, one command pack and one pikeman pack, together with the extras, will give me six battalions of foot. A pack of horse contains 15 castings, three of which are the command figures; two packs will provide two regiments, one of three squadrons and one of two squadrons.

I hope this dispels suggestions that 10mm would not look as good as other sizes.


I recently got the standard allied starter pack delivered last week so I can see the issue with missing the additional ensigns. I'll experiment with the differen scales you use. Thanks for that.
No man's knowledge here can go beyond his experience
- John Locke
Top
Post Reply
28 posts