AAR from my Donnybrook-Scenario: A Great Northern War Skirmish


Historical Background
1708 AD It`s the Great Northern War.
The swedish King Charles XII. invades Russia with his mighty army. Tsar Peter the Great uses scorched earth policy and evades with his troops from the invaders. The swedes march on and suffer from attrition, hunger and many small skirmishes with russian and cossack light troops.
The swedes are forced to spend a harsh winter in sparse huts in freezing cold Ukrainia and are further decimated throu illness, starvation and fighting.
In the summer 1709 AD the weakened army suffer a crushing defeat at the battle of Poltava.

The scenario
In spring 1709 the ongoing skirmishes with cossacks had taken their toll and a small detachement of the swedes is split from the main army. A part of the detachement hold some improvised barricades and walls around a hut and is attacked by cossacks. Some other nearby swedish and russian troops will arrive as reinforcements after the first shots are fired.
The game lasts 12 turns and in this time the russians must drive the swedes out of their defenses.
At the start of the game there are some swedes behind the barricades and three cossack units on table.
After every turn over card a randomly selected new unit card from each side is put in the card deck. Reinforcement units arrive variable at one of two possible table edges (the russians had the left short table edge and the long table edge opposite the swedish fortifications. The swedes deploy on the long table edge of their side and the right table edge.)

Miniatures are from Wargames Foundry, The Assault Group, Redoubt and Warlord Games.
Buildings from 4Ground, Barricades from Ainsty Castings, the terrain is scratch-build 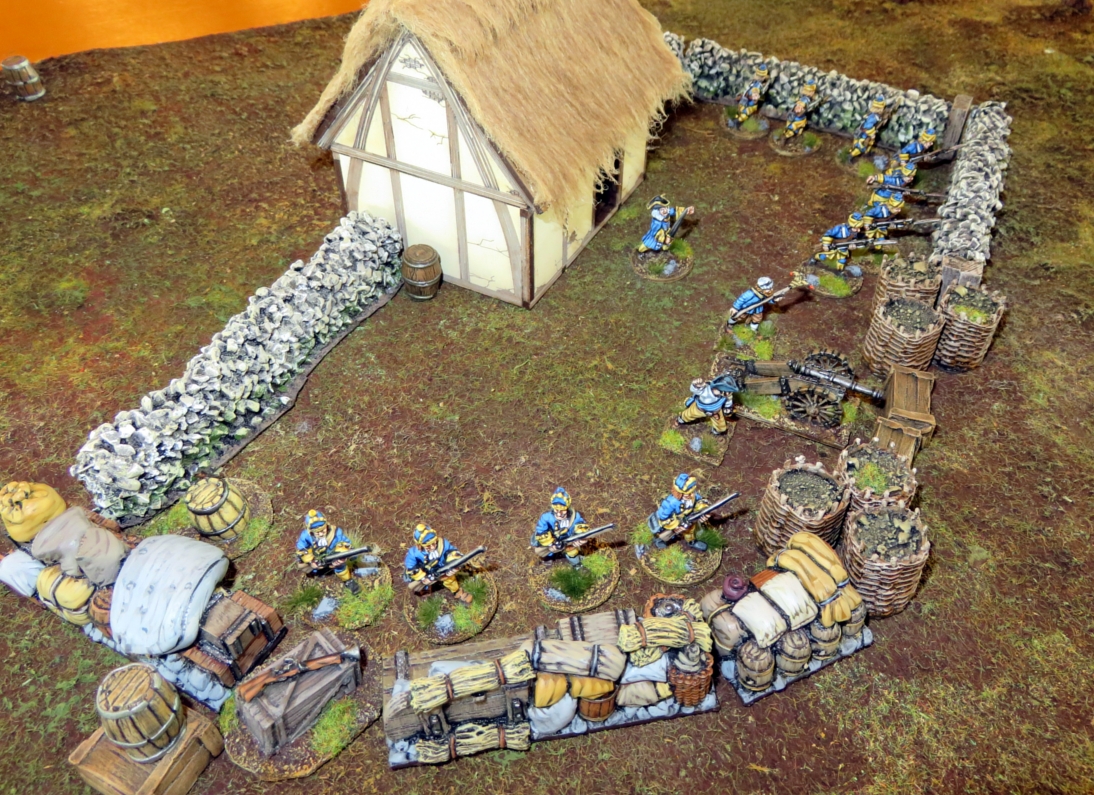 1. The barrikades and the hut. There is a swedish officer, 8 musketeers, 4 grenadiers and the light cannon 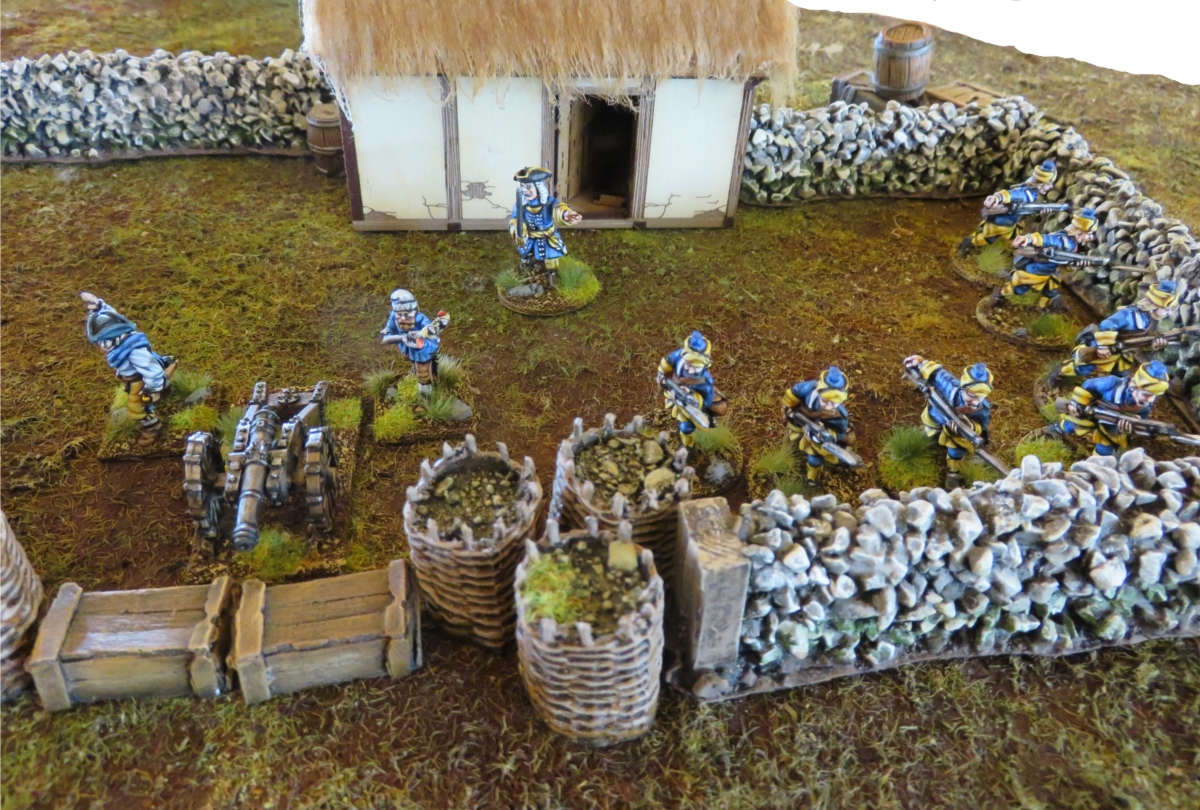 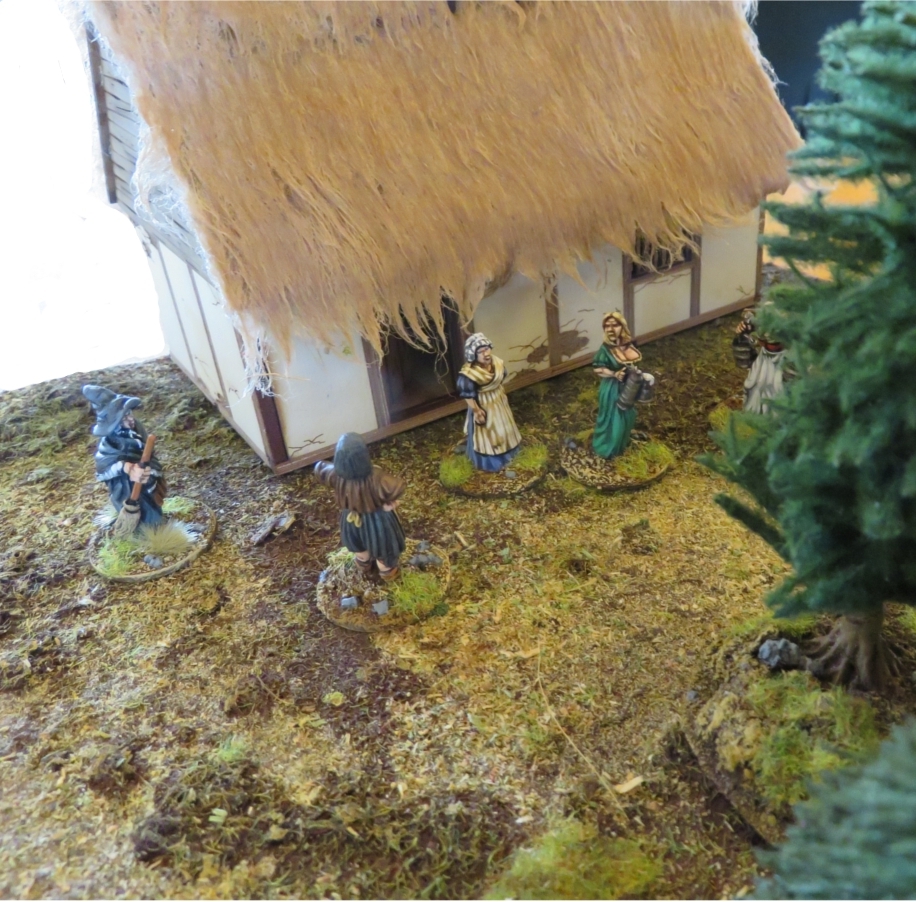 3. some villagers discuss the probable outcome of the skirmish. The Inn-Keeper ist angry about the interruption of his business 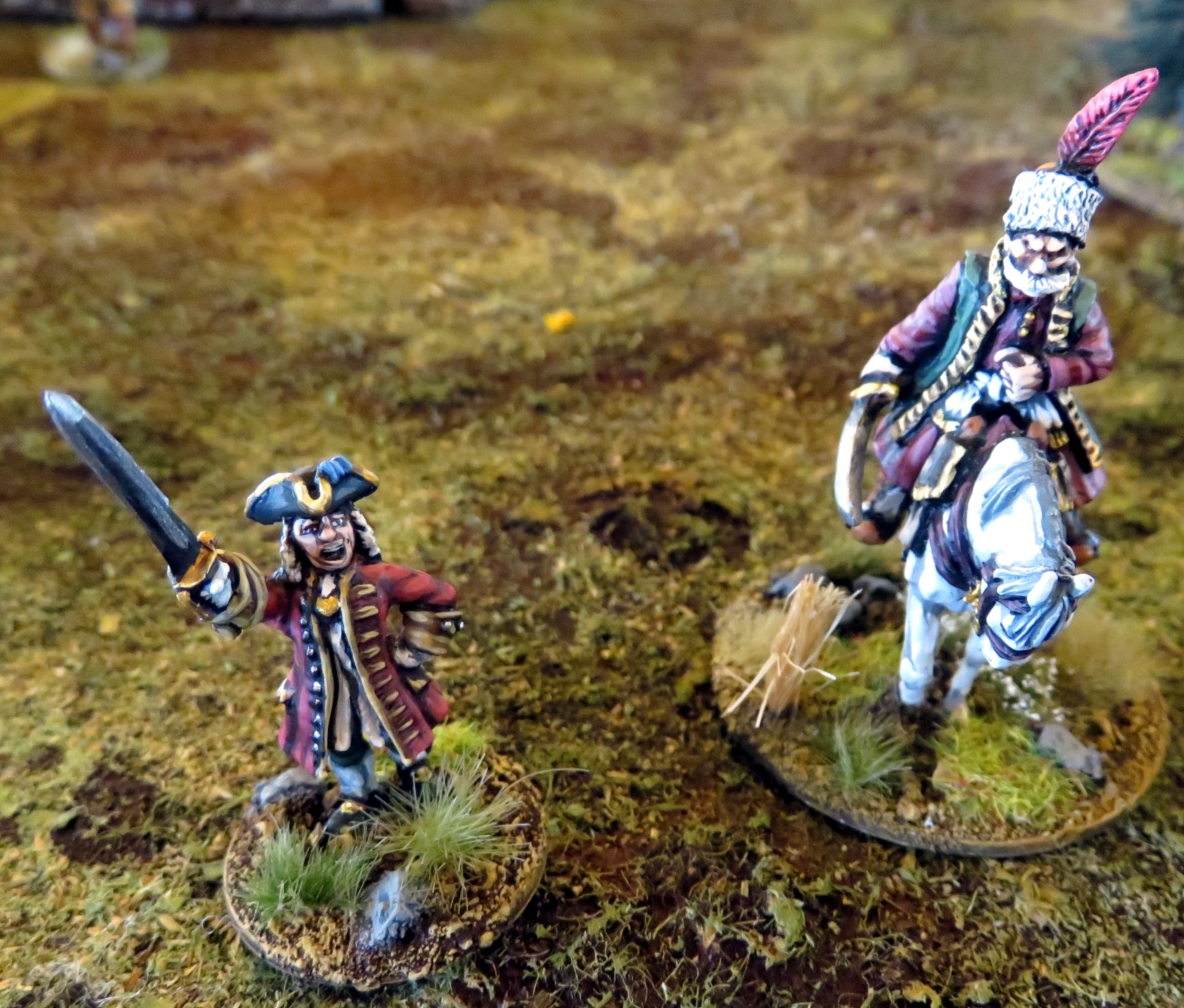 4. The russian officers: Count Menshikov of the regular army and cossack Hetman Krasnikow
The russian Count met his ignominious faith as he charged alone the swedish gun and was killed by the ramrod of one of the gunners. 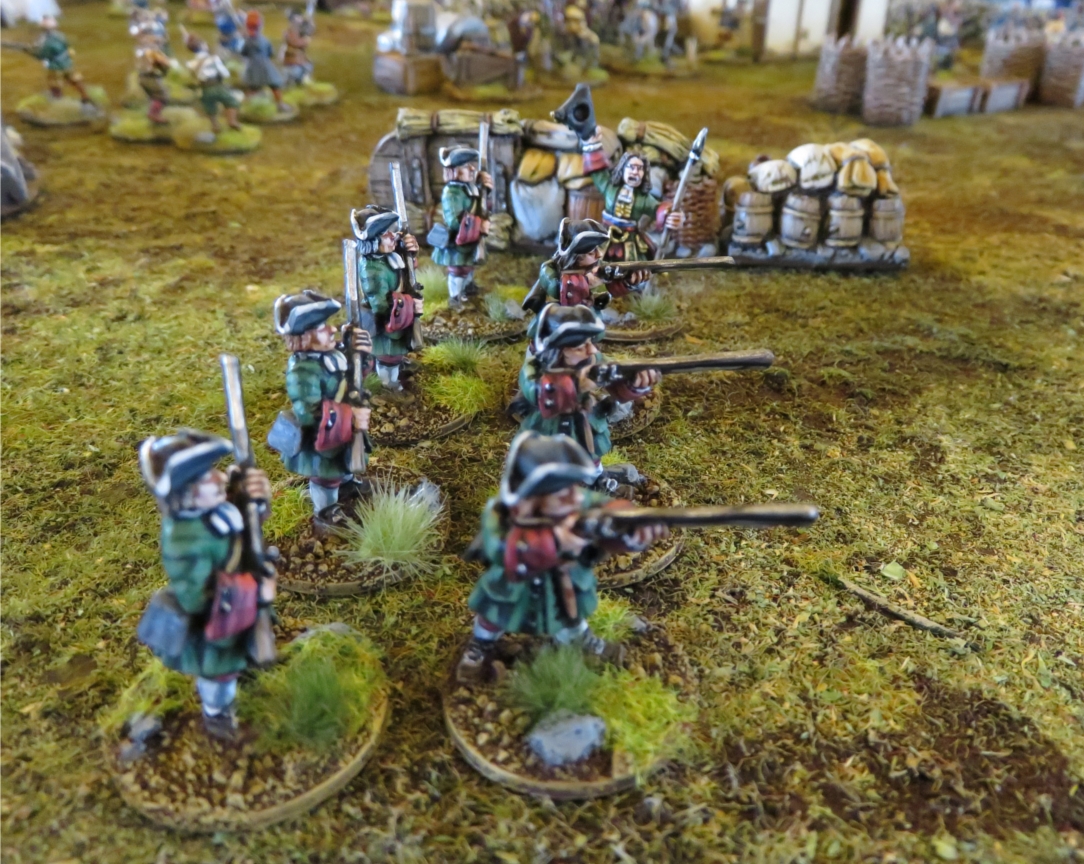 5. A russian Sergeant command his line infantry to fire a salvo 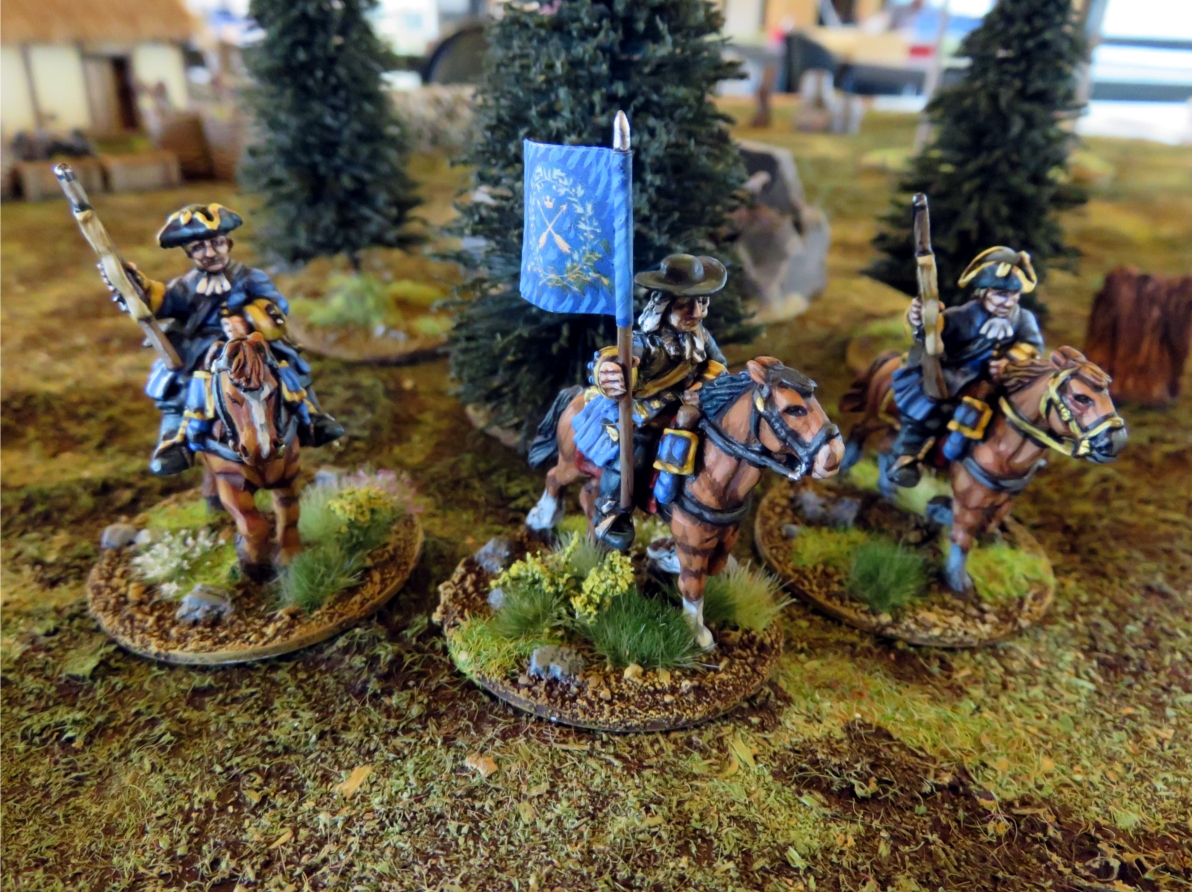 6. Swedish cavalry reinforcement. They are elite and very well equipped, but managed all the time to be shot, before they could take part in the fight 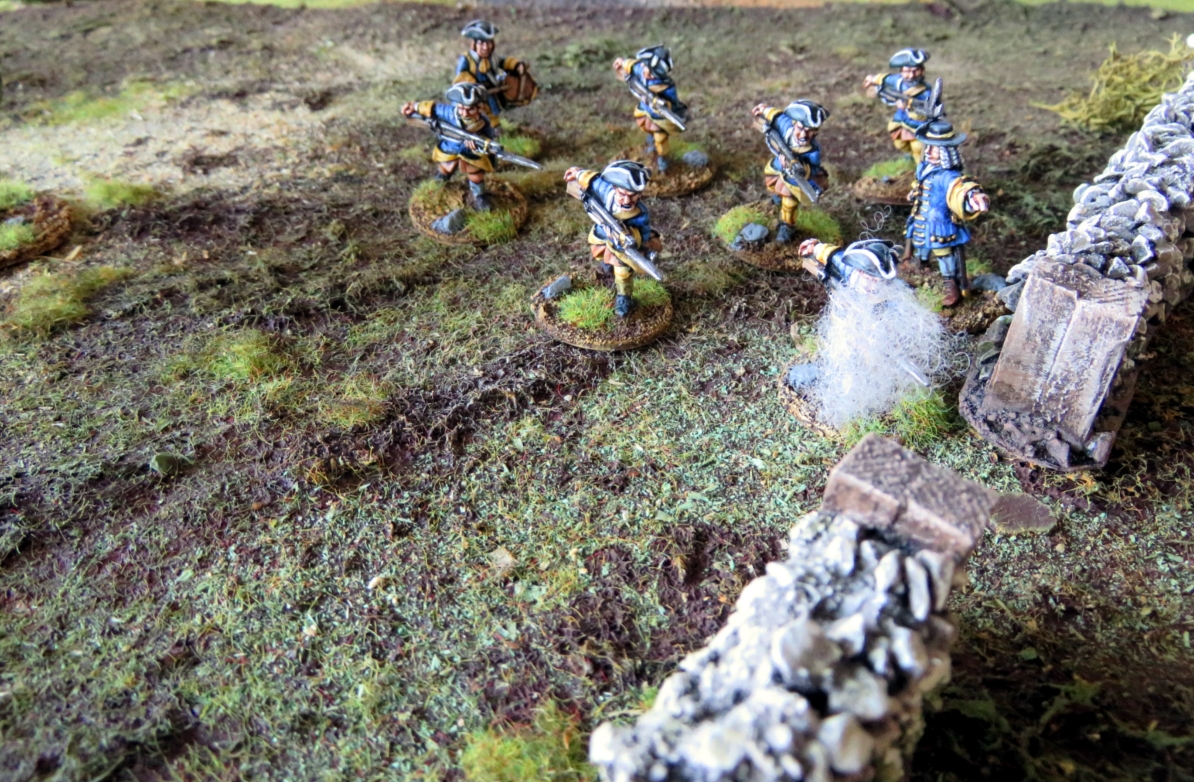 7. another unit of swedish line infantry arrives and is ordered to their position in the battle line. But all is in vain. 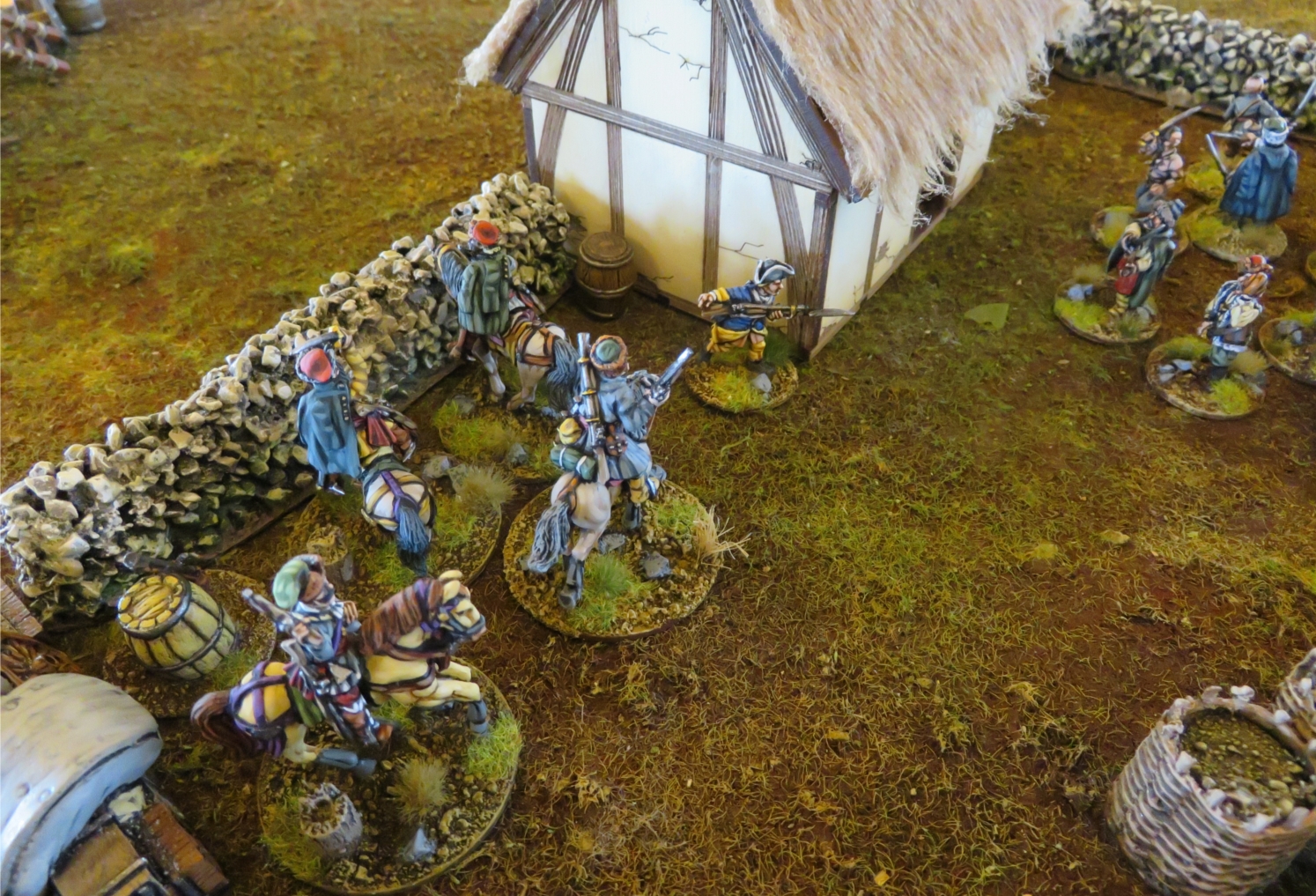 8. The end is in sight. A lonely swedish musketeer against overwhelming odds. 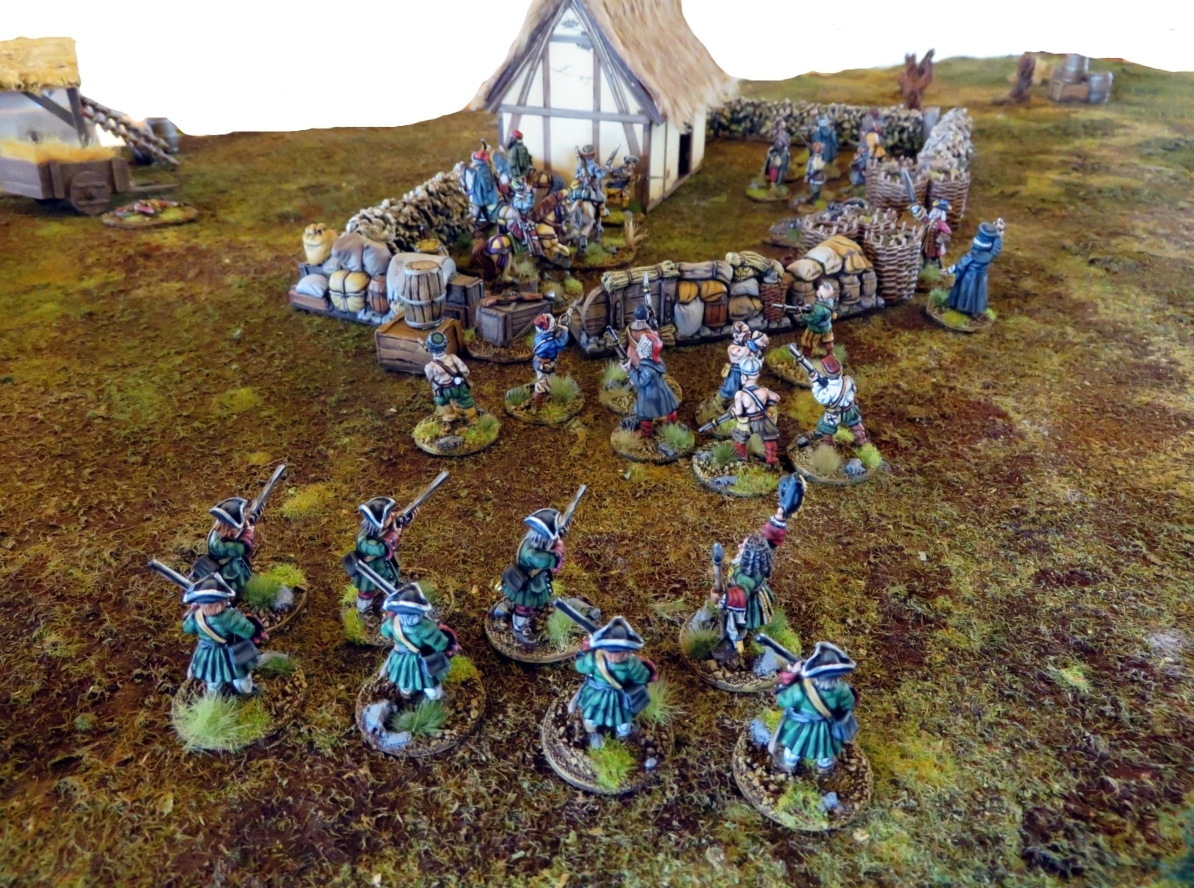 We´ve played the scenario three times at Attriticon, a nice small Convention in Ulm in south-germany.
Everytime the swedes had a hard time, but the outcome was often really close. At the end the swedes won once and lost two times. The scenario provided thrill and a lot of fun, so everybody enjoyed it