A section devoted to questions and answers for this period.
Post Reply
69 posts

I have a question on sources... I have begun to paint a few French Reg'ts and as I have begun to research the proper facing colors, I noticed a discrepancy on some of the untis between my two main sources - Funken's "Armies of the Lace Wars" and Grant's "The Armies and Uniforms of Marlborough's Wars."

Which is more accurate for the period? Are the French flags in Lace Wars accurate?

Thank you for any help!

As you appear to live in the USA, I would recommend you visit the "On Matters Military" webpage & click the Marlburian link

You will see some great references there, especially Robert Hall's 3 CD-ROM's of French Army Uniforms. These cover all the known regiments with as much information as seems to be available, and also contain some "informed speculative reconstructions".

One thing that will become readily apparent about this period is that there is more unknown than known!

Which French regiments are you interested in and I can check the Hall reference stuff
Owner - Default Models
http://defaultmodels.blogspot.com/
Top

Thank you Rohan - I was not aware of the cds! As for which reg'ts I am interested in - I am looking at Nice, Montroux and Navarre right now.

Thanks again for the responses!

This has answered my question too, as I intend to start painting the French too.

Hall gives the following for the regiments you mention :-

Navarre - he quotes 3 references - all agree on grey coat with grey linings/cuffs - 1 reference states red waistcoat (from contemprary record of 1698) another grey. The third does not refer to waistcoats. Yellow buttons.
As a named province regiment, the drummers would have worn Royal Livery.
White/Lt Grey breeches.

One agrees with the Grant listing of white/Lt grey coat & linings with red waistcoat - the reference for this variant is the work of Lienhart & Humbert c1900 that may well refer to later period c1720-30 uniforms.

The second refers to a blue coat with red linings that is from a 1692 reference (confusingly the Hall colour plate shows red coat lined blue but I feel this is likely an error). This uniform is likely for the earlier period as the regiment was initially raised by the Marquis de St Laurent from troops from various Savoy regiments & their uniforms usually had a dark blue coat. Perhaps the coats changed to the possibly cheaper Lt grey cloth after the Compte de Nice took over the ownership of the regiment (there were 3 Compte's de Nice sequentially owning the regiment - they were the 1st, 2nd & 3rd sons of the Marquis de St Laurent - so all in the family!)

As far as buying flags for these units goes, the dealers I know about are :-

There are plenty of free sites for French uniform/flag details if you don't want to buy books or CDs. Heres a couple;

These are good starting points so unless you live with Nazis nobody should be bothered by a few inaccuracies in the details. Most people here have other reference material and are glad to share should you find yourself in need.

Rohan beat me to it. The cd's are a great resource.

Also for flags, GMB do 7YW which are suitable in most cases.
Owner - Default Models
http://defaultmodels.blogspot.com/
Top

This is great - thank you everyone! Thanks for the details, Rohan! I paint my own flags (I use fine linen) - so as long as Funken is good, I will be using the flags illustrated there where possible - are there accuracy problems with them? Will post some pics soon...

I wouldn't use Funcken as a primary source. While the flags are largely correct, the colours, and especially the darker hues, are often way off perhaps due to a vagary in the printing process. For instance, Auvergne comes off as black and dark brown when it should actually be violet and black. Ditto for Languedoc, which should be violet and feuille-morte - a rich shade of orange brown - instead of the brown mess depicted by the Funckens.

Not all flags are that bad, and most get the colours more or less right, but there are better mainstream sources around, notably Hall. Another problem with the Funckens is that their flags all post-date the regency period and are not always relevant to the reign of Louis XIV.

Re the infantry regiments mentioned above, Navarre should indeed be depicted in grey coats lined grey with grey breeches and off-white/grey stockings. The waistcoat was red according to the 1698 Mercure Galant, a more detailed source than the 1692 Etat Général des Troupes de France which usually doesn't mention the colour of the waistcoat or the shoulder ribbons. The reference to grey waistcoats comes from Lienhard & Humbert, who generally used anachronistic sources for the reign of Louis XIV and shouldn't be considered a reliable source : Navarre had grey/white waistcoats between 1736 and the early 1750's, which is probably what L & H erroneously used as a basis. Drummers in the king's livery as befitted a regiment named after a French province, as Rohan said.

Nice was an Italian regiment raised in 1678 from soldiers from the Savoy army. The only reliable source for its uniforms is the 1692 Etat Général des Troupes de France list which gives blue coats lined red. The grey coats faced grey are another Lienhard & Humbert invention : this is obvious as they state the coat had a red collar and collars did not appear on French military coats until the mid-18th century. The colonel's livery does not appear to have been recorded.

Red coats with blue facings indeed for Montroux, which was considered a foreign regiment despite its mestre de camp being a native Frenchman. The red coats are confirmed by both the 1692 Etat Général des Troupes de France and 1702 Etat des troupes de France en l'année 1702 lists, so can be taken for granted. The colonel's livery is unknown.
One morning I shot an elephant in my pajamas. How he got into my pajamas I'll never know.
Top

Thank you Arthur... I got Funken many years ago (in German - could not find an English version) and never knew how it rated as a resource. Looks like I need to get Hall!
Do what you can, with what you have, where you are.

Well, for mainstream publications aimed at a wide, non-specialist audience, the Funcken Lace Wars books were an excellent resource : they were my introduction to the 18th century when I was a boy and I remain very fond of these two tomes, and not just for sentimental reasons. If you ignore the flag tincture caveat I mentioned above, I would still heartily recommend them to anyone looking for a primer on the French army during the reigns of Louis XV and Louis XVI, even though more modern publications such as René Chartrand's Osprey series offer greater depth of coverage.

But the books don't adequately cover the reign of Louis XIV - and don't make such a claim in any case. Everything in there is good for the 1720's onward but less so for the previous decades. As the Funckens themselves explain in their foreword, their books were essentially based on Lienhart & Humbert, the Noirmont & Marbot plates and Mouillard's work on Louis XV's army, which all focus on the 1720-1780 period. I don't believe the Funckens were aware of the sources Chartand, Boeri, Hall et al are now using to document Louis XIV's army and we must remember that the lace wars books are nearly 40 years old anyway.
One morning I shot an elephant in my pajamas. How he got into my pajamas I'll never know.
Top

Just finished the a battalion of the Regiment of Normandie... 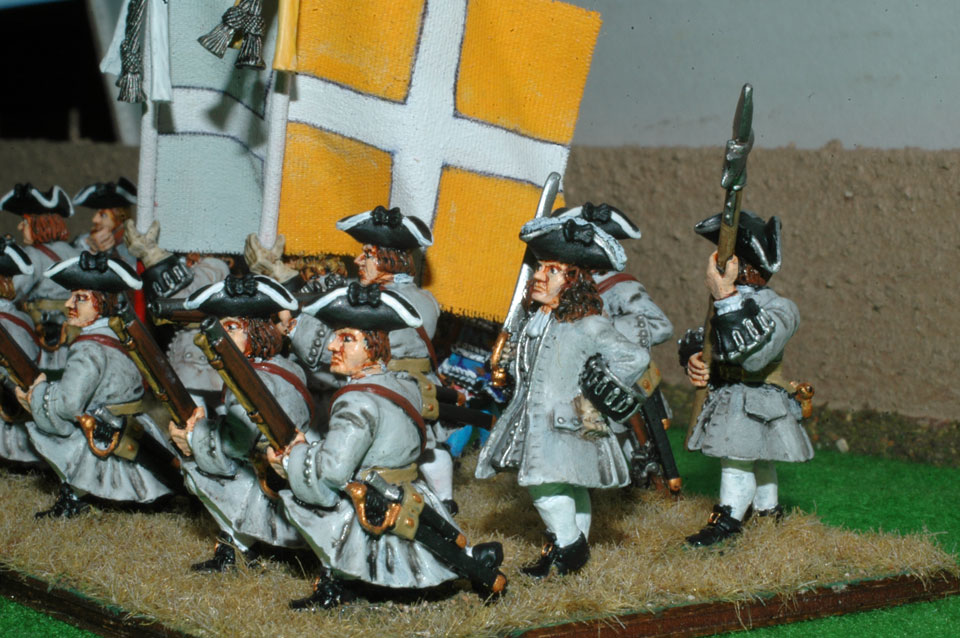 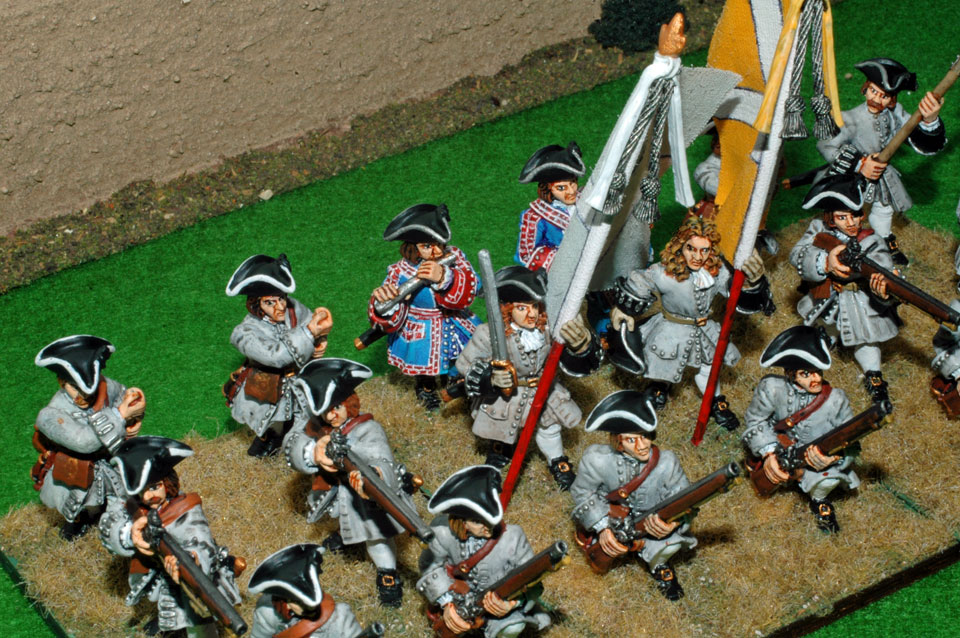 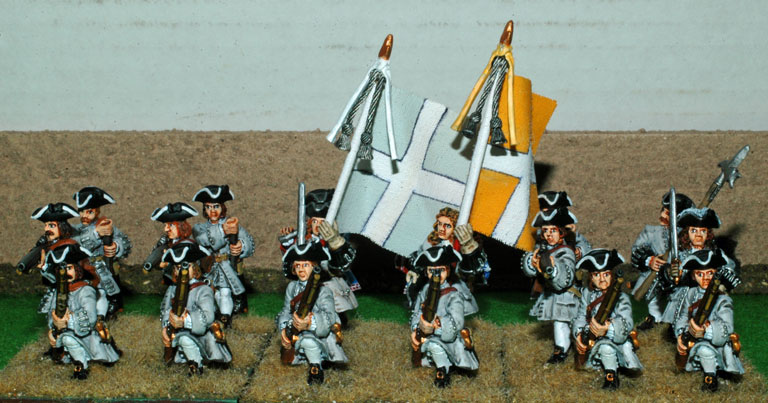 There are some very nice looking units being produced by guys on the forum, I especially like the 3 rank basing, I've used the same type of basing for a few of my units.
Cheers
Dave
Top