by chema1986
Hi guys! I have just update my blog with this battle 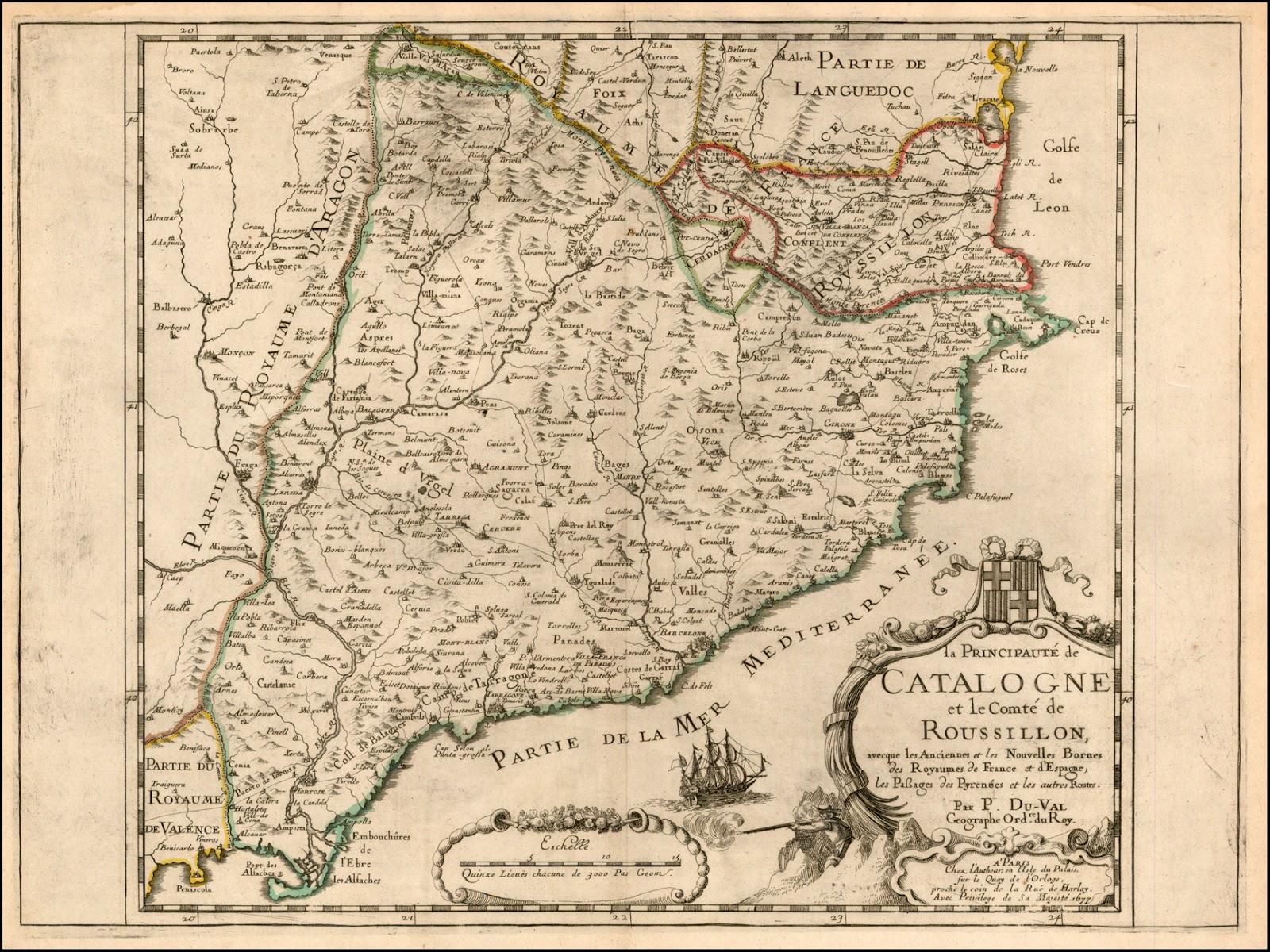 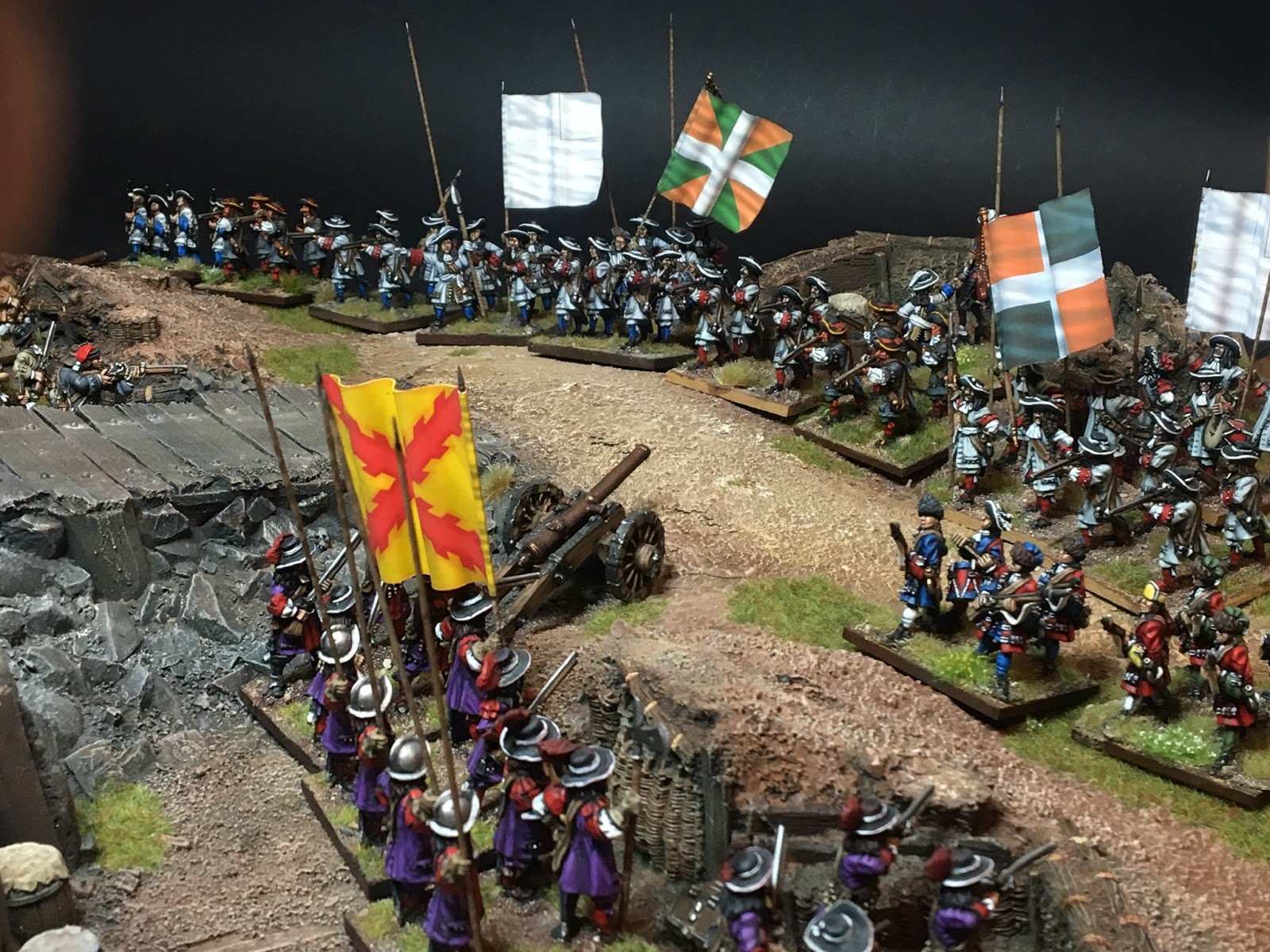 This battle was fought in a secondary front of the Franco-Dutch War, unleashed by the French King Louis XIV in 1672 who invaded the United Provinces. A year later a Grand Aliance was formed against France to which, Spain joined. Until then, peacefull Rousillon (north Catalonia), since 1659 recognized as possession of the French crown, became a front of the new war. France fought alone against numerous enemies in Flanders, Holland and the Rhine, so French forces were not very large in its southern border...This allowed the Spaniards to take the initiative.


Italian/Spanish Francisco de Tuttavilla y del Tufo, Duke of San German, was in charge of military operations against France. This veteran, who had fought in Catalonia and Portugal in the previous two decades, had a respectable army of 8,000 infantry and 2,500 horses, with which he started the campaign in May 1674. Before that, San German tried, without success, to orchestrate several conspiracies to revolt Roussillon against the French monarchy. It is worth to mention that a good part of this army (10 tercios) were taken and paid by the Catalan institutions and cities, which also raised numerous Somatenes (Catalan militias), apart from that, reinforcements from Castile and Naples were added to these troops.

the Duke of San German invaded the Rousillon by crossing the Pyrenees through the Col de Portell. The Spanish army was heavily supported by the Angelets de la Terra, the pro-Spanish Migueletes (miquelets, aka Catalan mountain guerrillas) from Roussillon. French troops, commanded by Monsieur Le Bret, could not oppose the large number of the Spanish attackers, and after beinqg defeated trying to block the passage to the invader on the Tech River, they concentrated around Perpignan. The Spaniards seized easily and in succession the castle of Maureillas and the towns of Arles and Ceret. The greatest success came on July 4th, when the impressive fortress of Bellegarde, which allowed the French to enter in Catalonia at their leisure, was surrendered without much resistance.
Given the chain of disasters, Le Bret was replaced by the famous Duke Frederick Von Schomberg. This general was born in Heidelberg, and was a veteran of almost 40 years of service, having fought in Dutch, Swedish, French and Portuguese armies.


Schomberg, who would end his days fighting against Irish Jacobites and his former French comrades, scored a small success over his adversary San German by forcing him to lift the siege he had laid on the village of Banyuls. At same the time, Schomberg,was reinforced with new troops, so he had 12,000 infantrymen, 3,000 horses and an auxiliary militia of 10,000 men. While the hardness of the territory and the dispersion of its troops in different garrisons had left San German with only 4,300 infantrymen. and 700 horses... San German, seeing himself greatly outnumbered, retreated with his army to the southern shore of the Tech River, where he quartered in a fortified encampment. From this position Catalan migueletes did not stop harassing French positions and convoys, even killing in an ambush Josep d'Ardena, one of the main leaders of the anti-Spanish revolt of 1640.

Schomberg, who, in the past, had defeated a Spanish army in Montes Claros (Portugal, 1665) a few years before, could not effectively counteract the incursions of the feared Migueletes. For that reason He decided to deal with the main threat: the army of San German, and then finish off the guerrillas. With this idea in mind, he ordered a surprise attack on the Spanish camp. However, the Migueletes themselves thwarted the operation, first discovering the French troops and then helping to repel the three assaults that the attackers threw on the parapets that defended the position. Finally, the Spanish cavalry expelled the French beyond the Tech River. In this action, a Swiss regiment leading the attack, was almost completely annihilated. 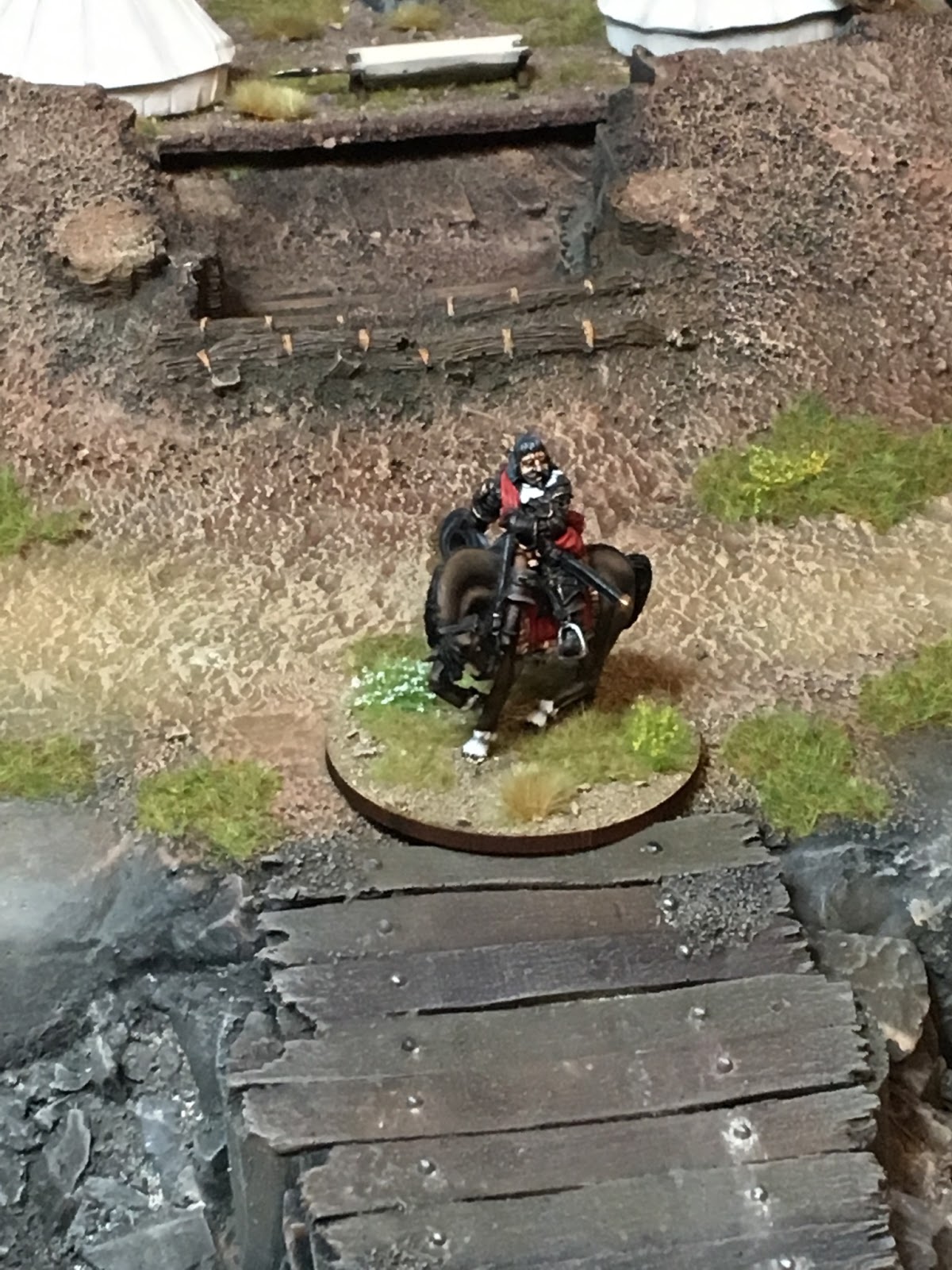 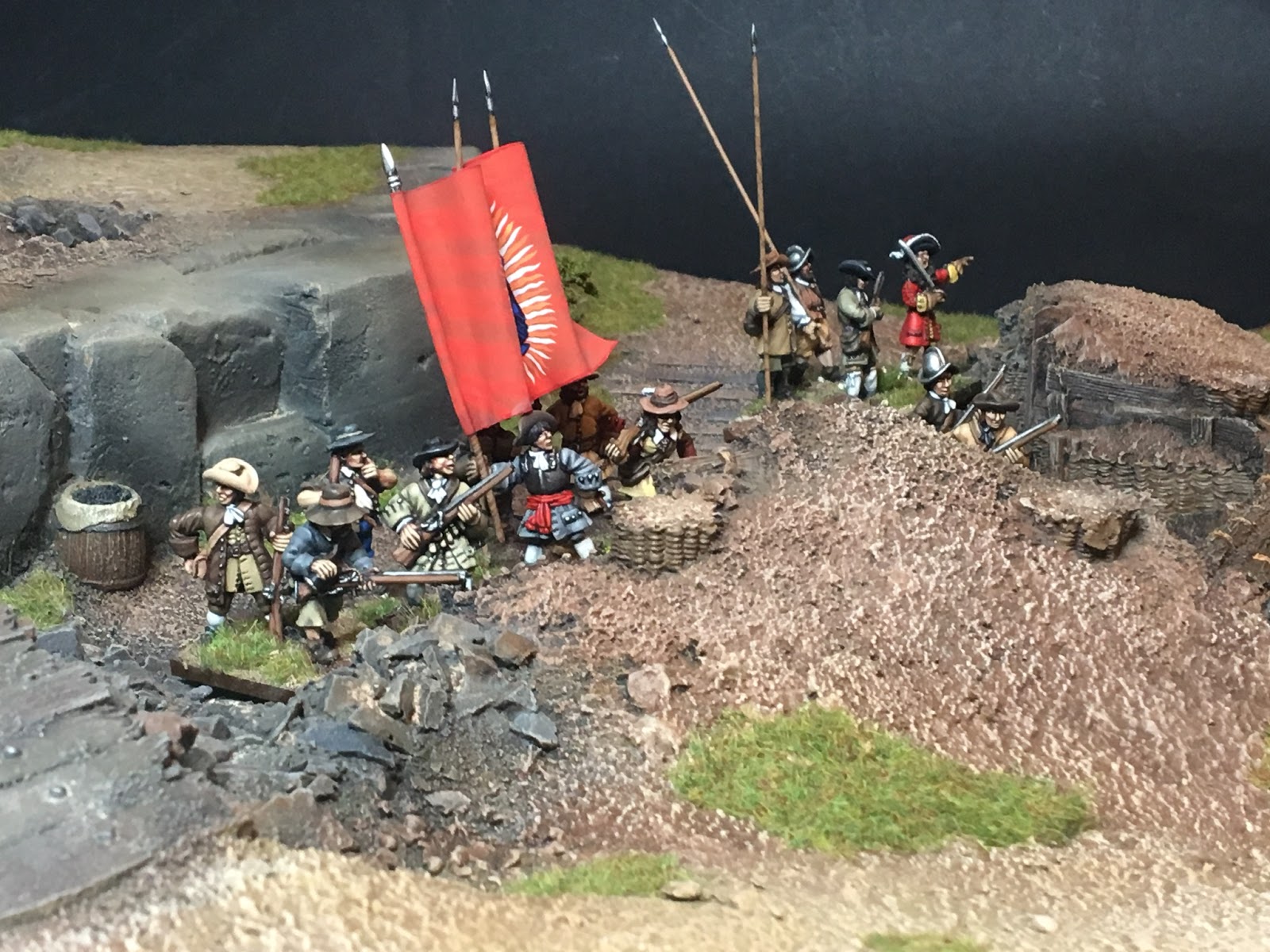 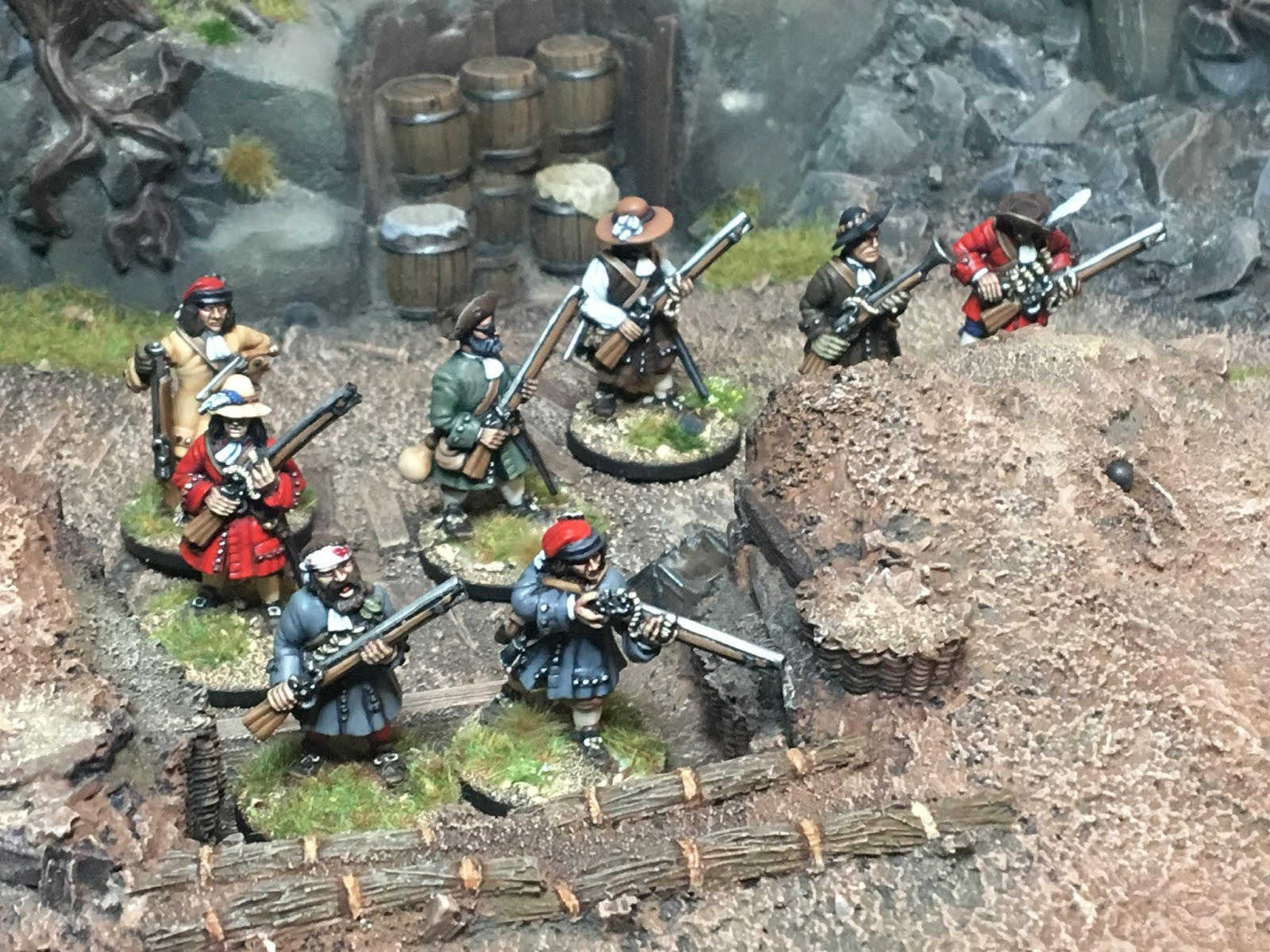 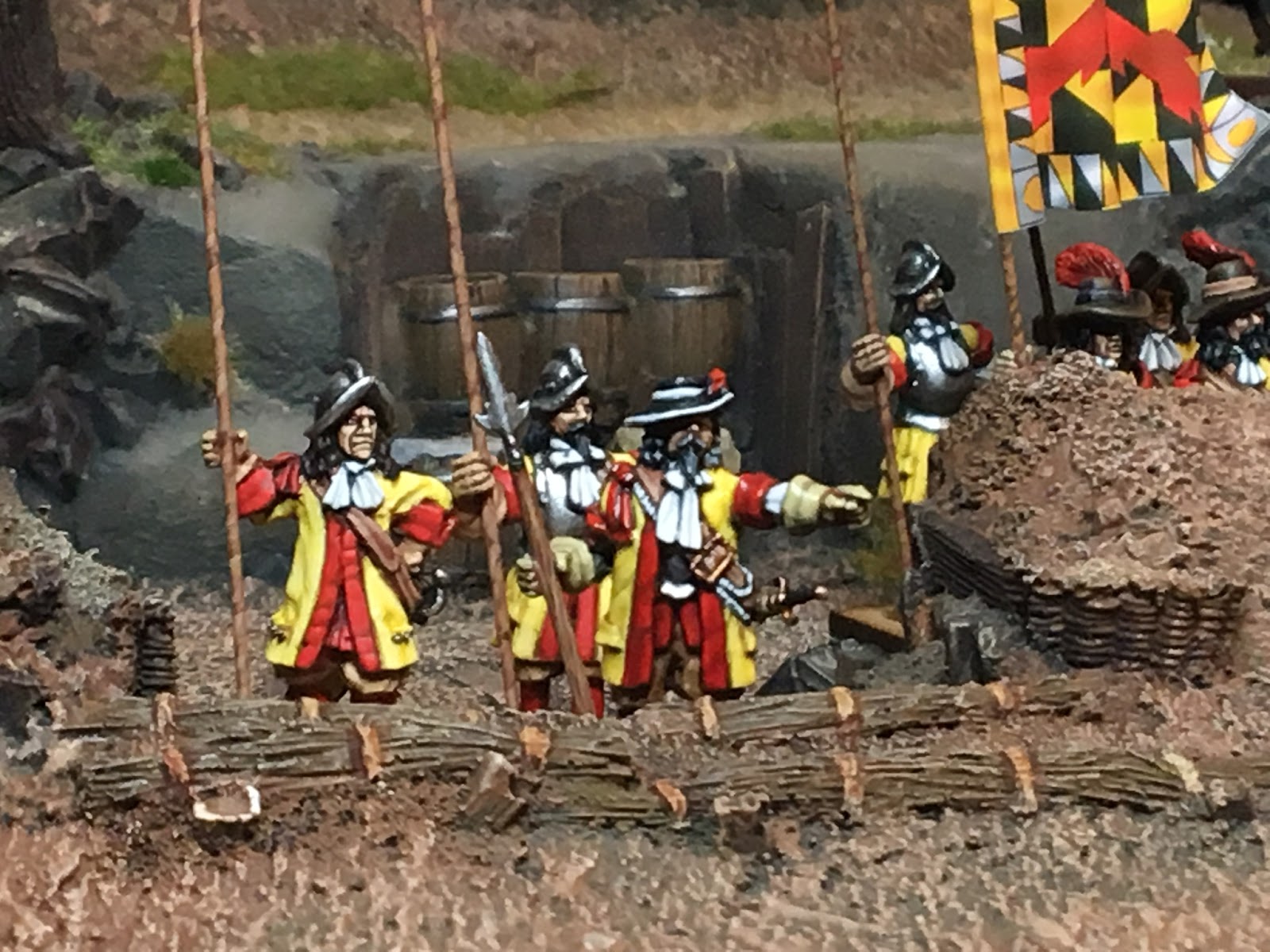 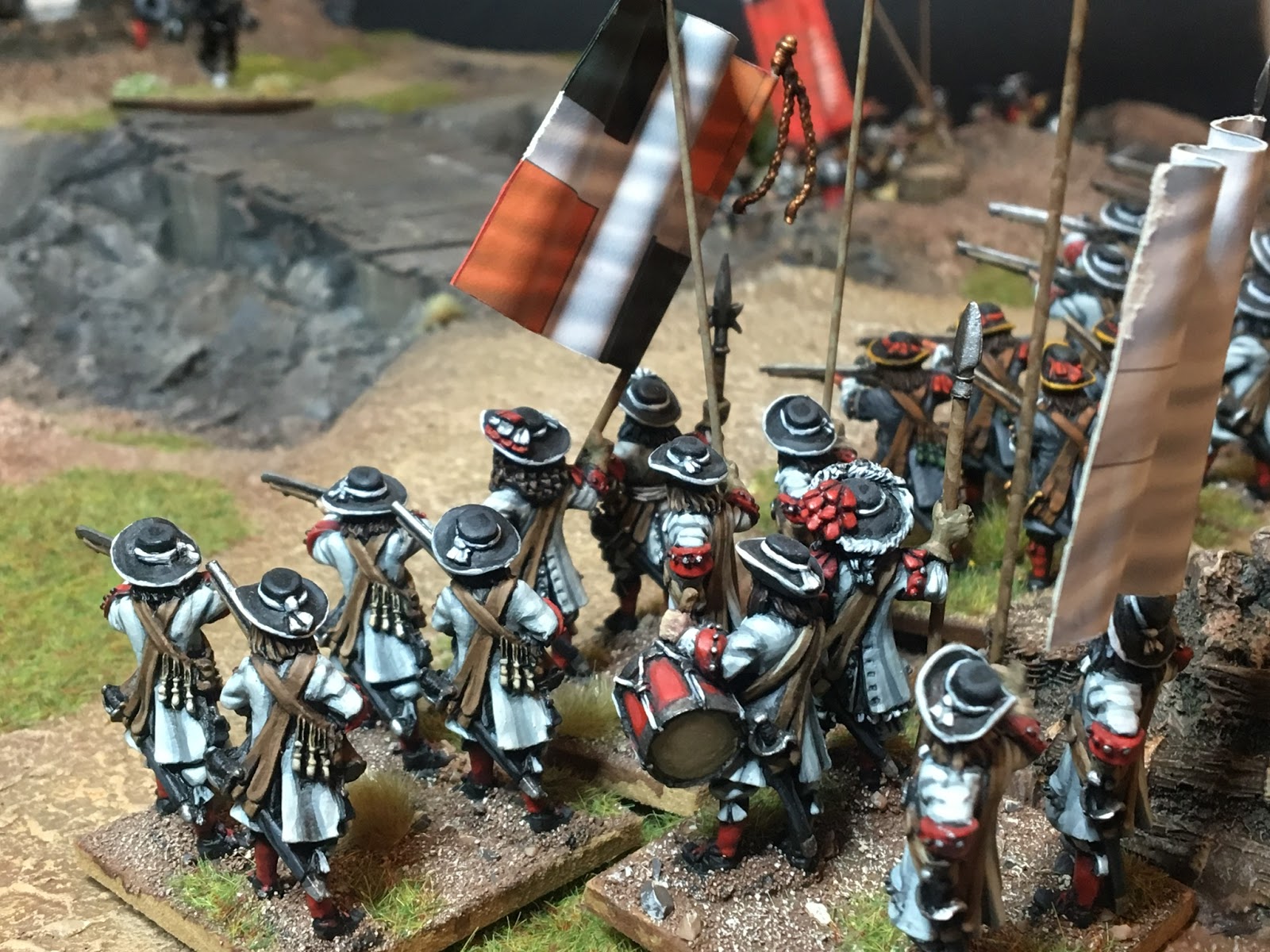 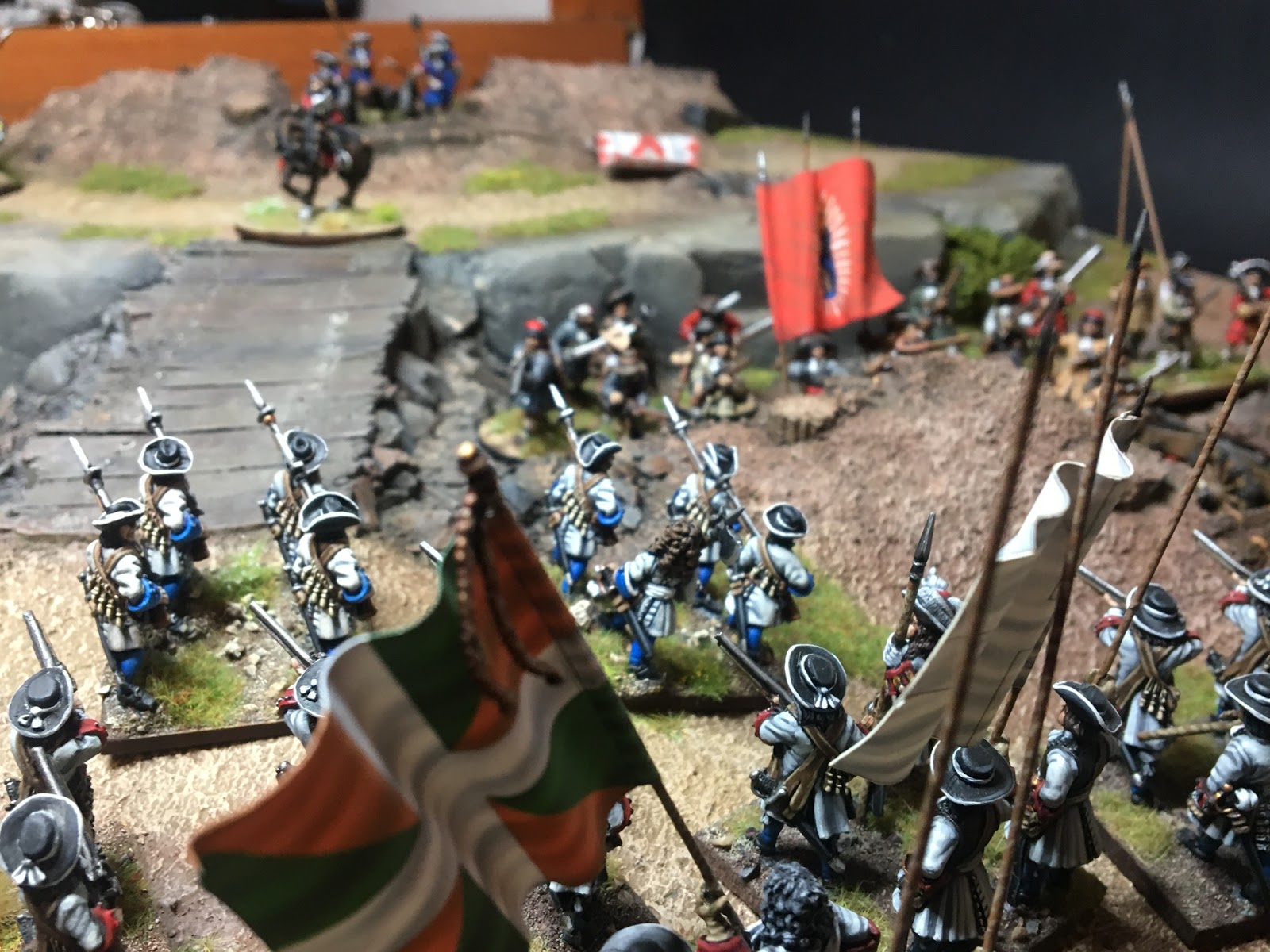 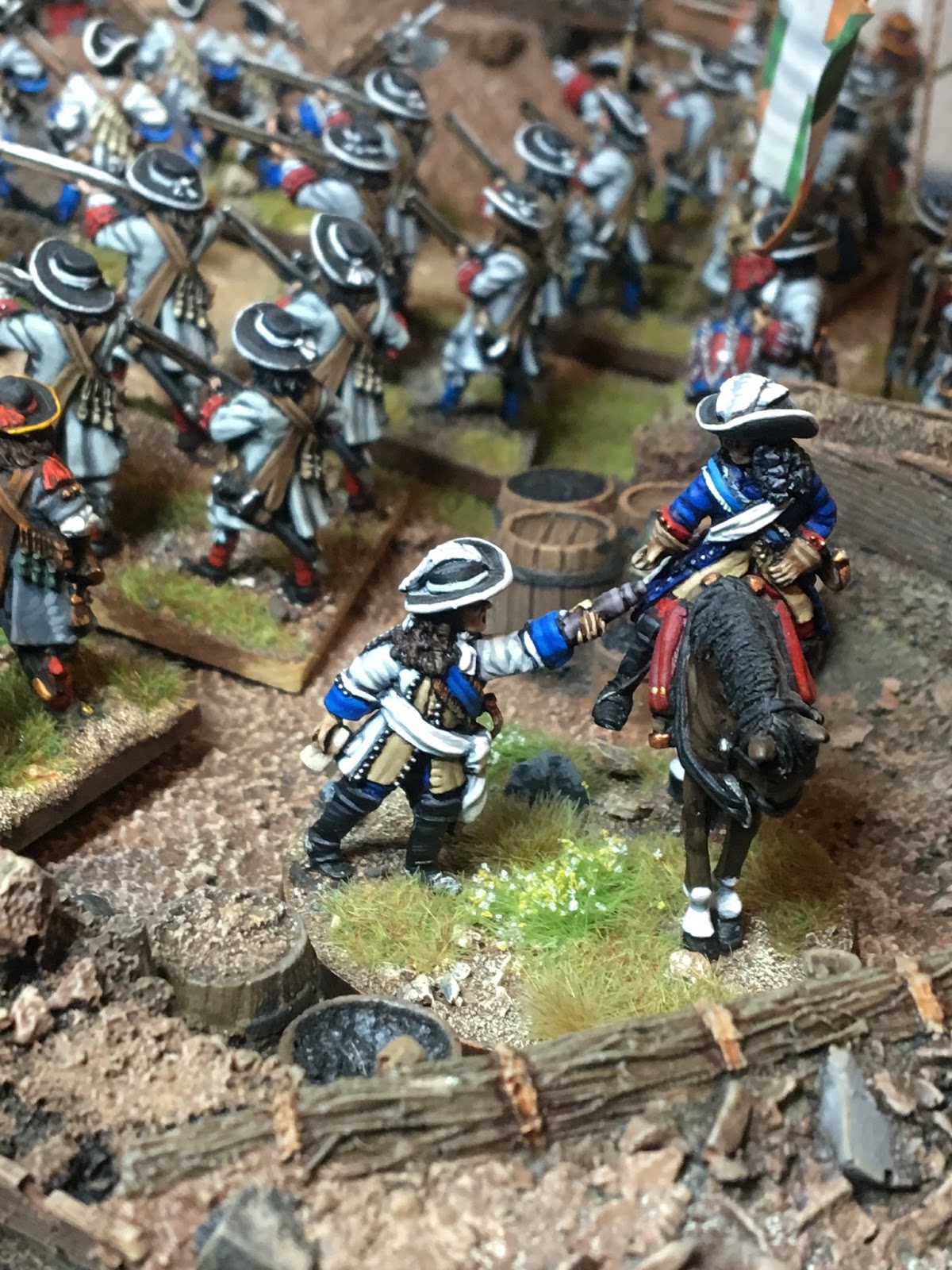 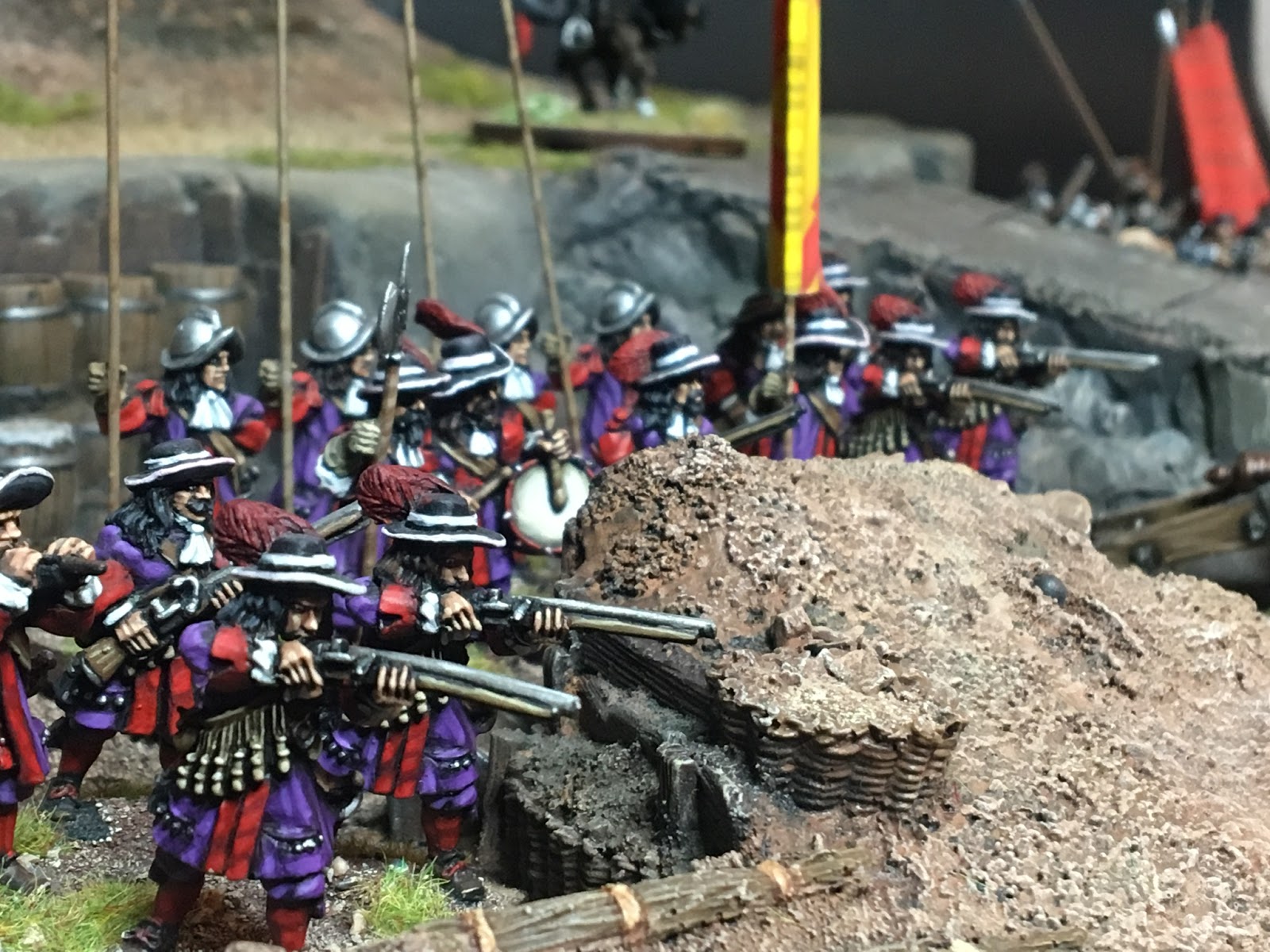 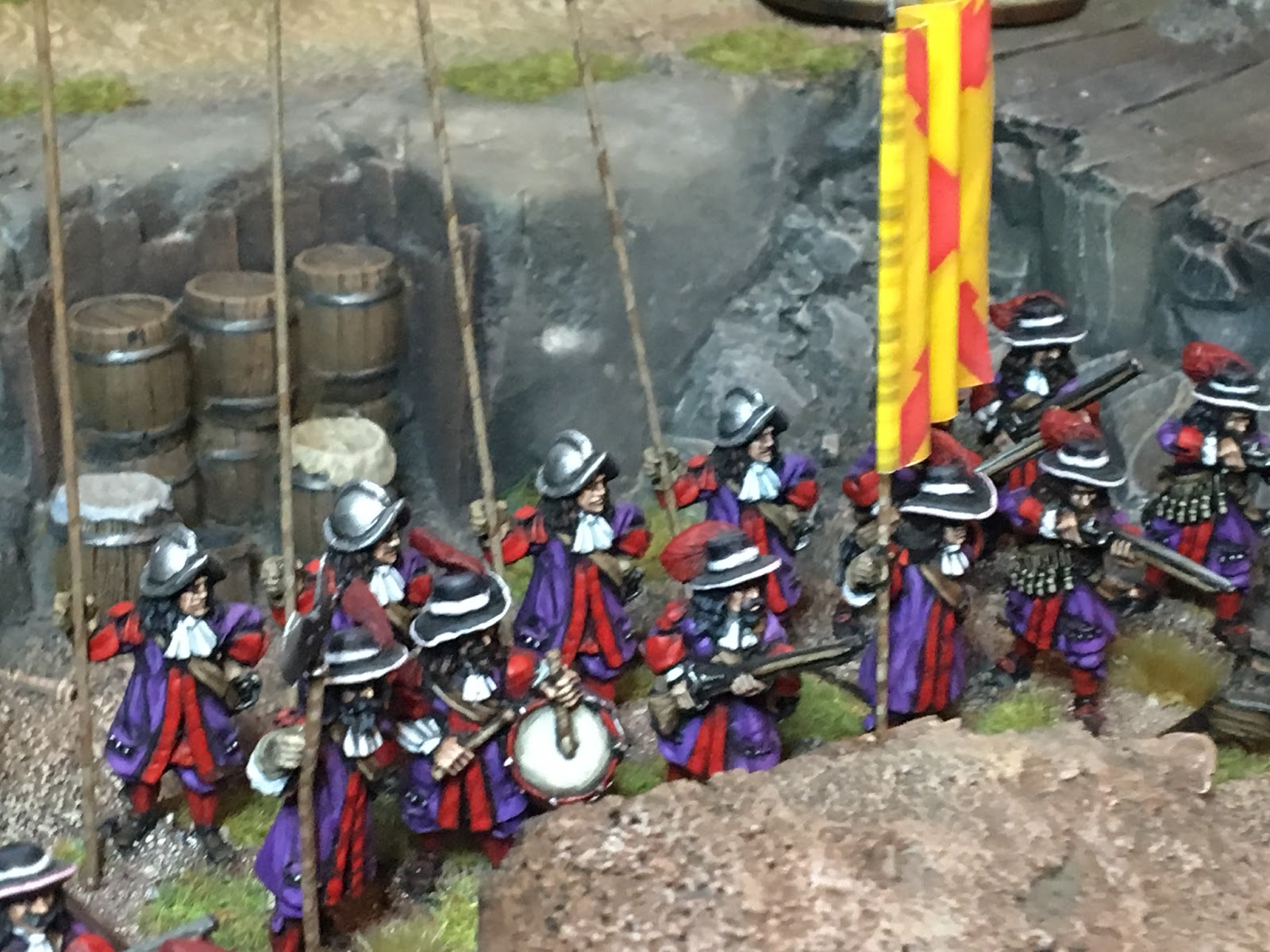 Despite the hard setback that had become his surprise attack on the Spanish camp, Schomberg did not desist in his attempt to destroy the Spanish forces behind their pits, trenches and parapets. If he could not break the defenses of the Spanish camp, he would try to drive the Spanish troops out into the open to take advantage of his numerical superiority. The first maneuver of the veteran general was to take the castle of Sant Joan de Pagès, north of the Spanish camp. The control of the old medieval fortification allowed him to have a safe position to cross the river and dispose his forces in front of those of San German, barely a quarter of a league from the castle. But the duke did not attack. Instead, both armies spent three weeks observing each other from afar, waiting for the enemy to be the first to move. And San German was the first to do it. Given the shortage of supplies, the Spanish commander decided to move south of the Pyrenees, on June 19.

The camps Spanish (in the mountainous area) and French (in the plain) on either side of the Tech River. 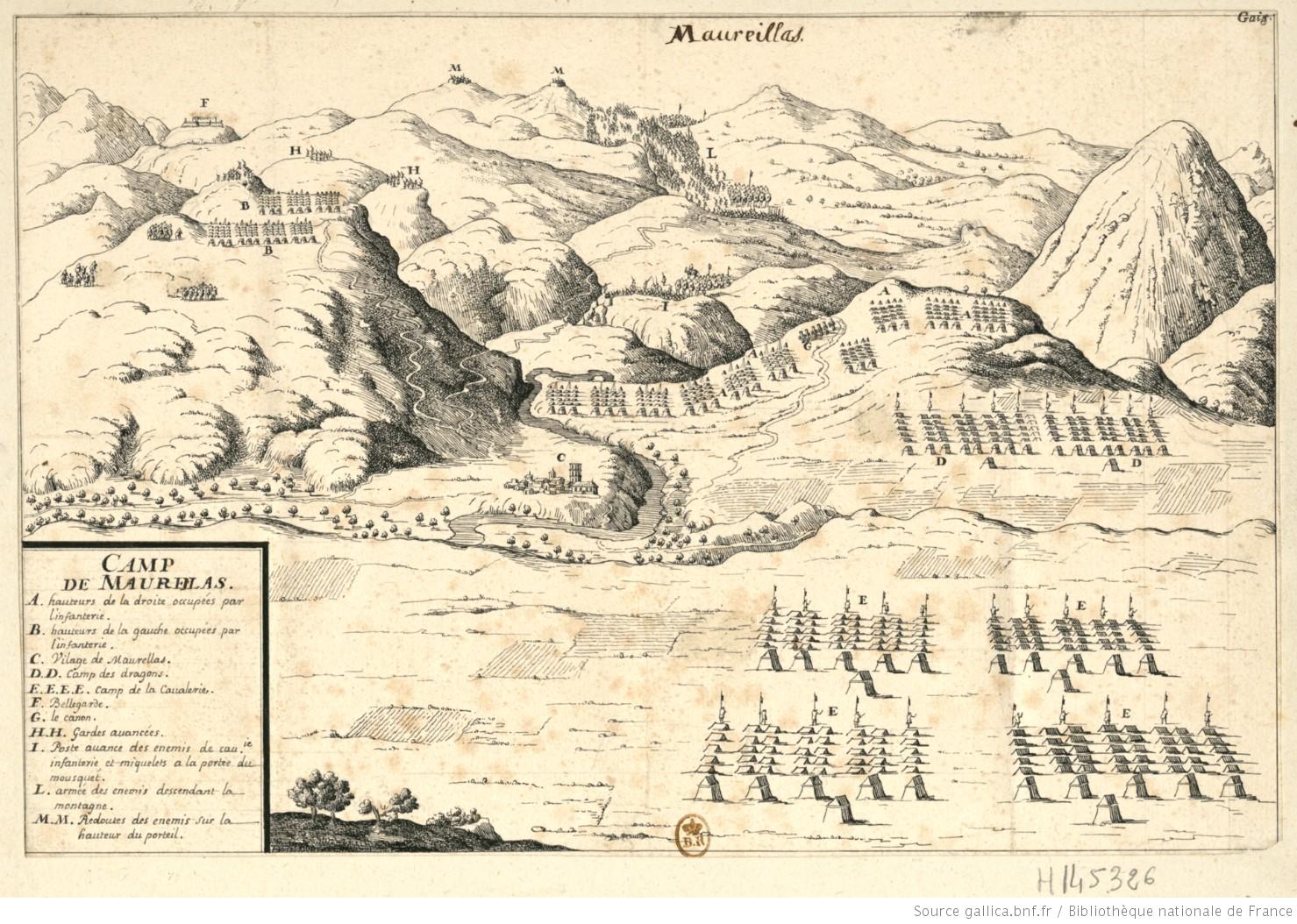 The Duke of San German, in order to prevent a mass rout, made his troops form in order of battle and marched first the baggage train. But the French were not fooled, and they attacked the Spanish army on both flanks: In the right wing, the French onslaught was repelled by the Tercios of Barcelona and Vic, commanded respectively by Maestres de campo Francisco de Mari and Manuel de Sentmenat. Reinforced by the cavalry wing of the Count of Lumiares, which defeated the French squadrons, both Tercios forced the French infantry to flee. On the left flank the French regiments were held back by the Tercios of Marquis of Aytona and the Guardia Chamberga (royal guards), the latter under the command of Marquis of Leganes. The French cavalry was also dismantled on that flank, and the infantry finally disbanded in search of salvation on the northern shore of the Tech. 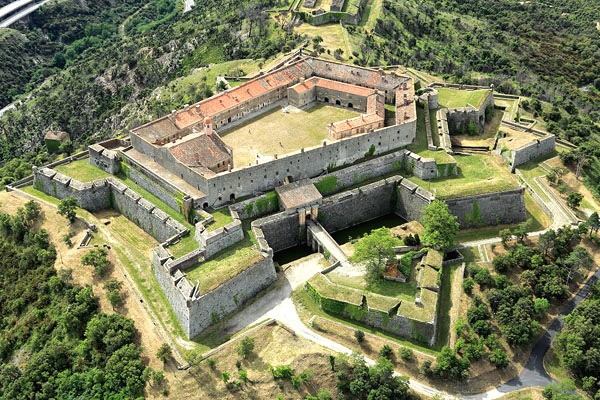 The French losses were very high. Between over 1000 men lost their lives, and some 1,500 or 1,600 were taken prisoner, including Schomberg's eldest son, who was a cavalry colonel. The French also lost all their artillery, 600 mounts, and most of the baggage. In addition, the Spaniards disabled with nails the cannons that could not be taken. On the Hispanic side there were also many deaths to be mourned. The Trozo (regiment) of cavalry of Medina was one of the most punished units, it lost practically all its troops. Schomberg still had superior forces, but he feared an outbreak of indiscipline, and in conjunction with the cold that soon came with the fall, were decisive in the decision of the, once victorious, general to retire to their barracks. Thus, the Spanish cavalry could enter the country looting here and there until the very gates of Perpignan.
Unfortunately for Spain, the following year, in Sicily would explode the famous Messina uprising, encouraged and supported by France, and the Spanish crown would be forced to send to the Italian island, many troops of the Catalan front, wich was deprived of it best units. Schomberg then regained Bellegarde, and Spanish hopes of regaining the county of Rousillon faded.

Spain had to fight on the defensive for the rest of the war on the Catalan front, although, luckily, the troops sent to Sicily, after 2 years, were able to expel Louis XIV forces from Messina, ending the costly rebellion in 1678.

by jambo1
Cracking good read and such lovely pictures! Superb looking figures, your painting is quite stunning. Greatly enjoyed it.

by chema1986
Thanks jambo1, It is a pitty there is almost no info in English about most battles in Franco Dutch war.

You are spot on, a real pity as it is a very interesting period.

by TheRightfulKing2013
Very nice. May I make a minor suggestion? I notice from the blog you linked to that many of the hats from before the 1700s are white/grey. So maybe make the hats that colour? I think it wasnt until around 1695 that some regiments had black hats in the Iberian regiments.

Also you represented the cut of the Spanish coats for this time period very well, with the lapels.

TheRightfulKing2013 wrote: ↑
Sat Apr 20, 2019 2:55 am
Very nice. May I make a minor suggestion? I notice from the blog you linked to that many of the hats from before the 1700s are white/grey. So maybe make the hats that colour? I think it wasnt until around 1695 that some regiments had black hats in the Iberian regiments.

Also you represented the cut of the Spanish coats for this time period very well, with the lapels.

Many Thanks!! Yes I know, Initially I painted some regiments in black hat in order to be used for the League of Augsburg War too so that I can use my units for both conflicts

My newer painted units are in grey, brown and white hats.

by curassier
Wonderful figures.
Please can you tell me what size your flags are ?
All best

WARS AND SOLDIERS IN THE EARLY REIGN OF LOUIS XIV. VOLUME 1 - THE ARMY OF THE UNITED PROVINCES OF THE NETHERLANDS, 1660-1687

WARS AND SOLDIERS IN THE EARLY REIGN OF LOUIS XIV. VOLUME 1 - THE ARMY OF THE UNITED PROVINCES OF THE NETHERLANDS, 1660-1687

Thanks Mate! hehehehe I already own that book, is awesome!!