A section devoted to questions and answers for this period.
Post Reply
5 posts • Page 1 of 1

new(ish) to the 9YW period and I have a quick question for the hive mind:

One often sees in uniform guides / historical accounts that such-and-such regiment were all mounted on grey horses (or Bay, or Black, etc) - How true was this? especially on campaign?

My thoughts are that regimental / company farriers (or whoever was procuring horses) would need horses of the right size, health, temperament, etc. and colouration would likely be further down the list - am I wrong?

I guess the question in a nutshell is: when one is painting a unit said to be mounted on a certain colour horse, how uniform should this be?

Under normal circumstances I would say that times in which Regiments could pick certain colors for Horses from the available "Pool" is in Peacetime's. Rarely at War. Sure if you bread only, say, 3 Colors it might work to a point...but I doubt it.
Variations of White or grey and brown would start right after the first losses.

As so many things in War of this Times developed after the French Fashion white Horses, even in Black Mounted Regiments were used for Trumpets/Musicians.

There is also the Case - I draw this from a Napoleonic Saxon Regiment - that only the first Squadron was mounted on Black Horses.
But this Information left People who saw those Troopers on their large "Black" Horses to believe the whole Regiment had Black Horses.
(Most of the Horses were of a very Dark Brown). 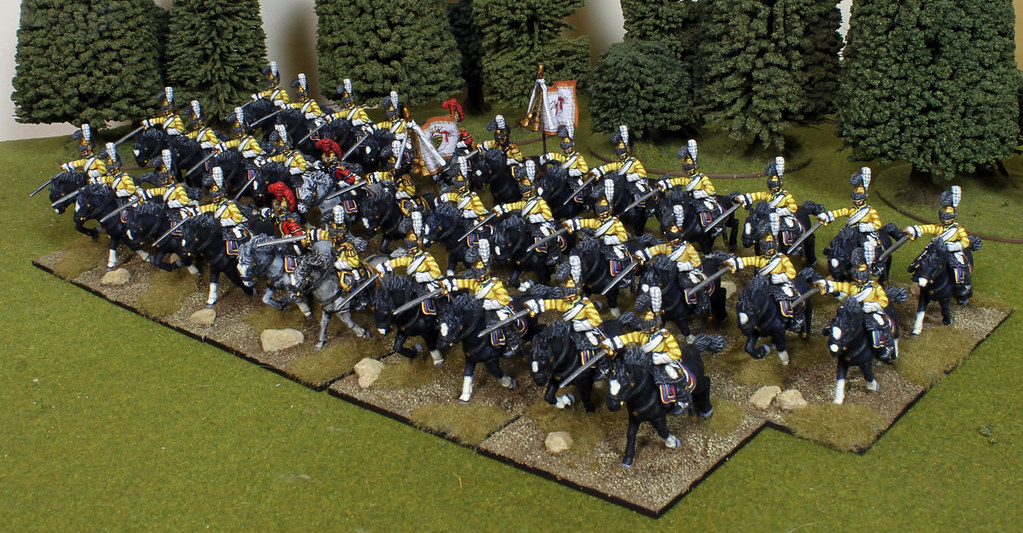 I expect this is a similar question as to how soldiers themselves are dressed and, regardless of reality, how you want to portray them. Do you prefer parade dress, with uniformity of horse colour and idealised uniforms, or the grubby reality of campaign dress.

From a personal point of view, if I'm going to invest cash and time in a long term army project, I want them to look good ! I understand that they didn't really look like that but I'm happy to accept the compromise.

In peace time regiments often had troops in particular colours, again this is unlikely to have lasted on camapign with troops takign whatever remounts they could get, but I pay a nod to this by matching horse colours on bases for some units.
http://gapagnw.blogspot.co.uk/
Top