Any questions relating to Beneath the Lily Banners rule system.
Post Reply
31 posts

For the 1689-1698 period we have pikes and IAW the BtLBv2 they have their own stand behind the center flag stand. One, it shows a unit has pikes, two although not part of the regiment strength it plays a role in game mechanics and three it adds visual dept to the unit on the table and is pleasing to the eye. It also allows those who want to move ahead in the period (Spanish Succession) the ability to remove the pike stand but keep the regiment in action.

Cavalry Sqns: Over strenght at six figures and attacks in one line of six figures. Formatted this way because two/three figures on horses attacking eighteen (twenty four with pikes) figures doesn't look sound

I haven't tried what follows below, but lets say I only wanted to game the earlier period what effect would the following modified unit formats have on visual, game and rule factors. I'm thinking along the lines of the big battalion games you see for the Seven Years War but for the League of Augsburg period with Barry's rules.

Foot Regiment w/pikes: instead of having a 18 man unit with a pike stand behind three front stands what if I used just three stands with 9 figures per stand with the center stand middle and rear rank containing 5 to 6 pikes. The regiment would now have a game strenght of 27 figures. Visually would this work and rules wise would musket fire and causalties still work with the factor of six? My thinking is that the musket duel between lines was mostly ineffective with the weapons of the period anyway and had more to do with morale.

Because of the increase in Foot Regiments would Grenadier or Dismounted Dragoon battalions also have to be increase likewise.

Cavalry: Cavalry during the period attacked in two/three and perhaps

four ranks. With the increase of a regiment of foot at 27 figures is six figures now a better ratio or would sqns have to be eight figures.

On the blog 'Williamite Warfare' the author bases his rules and mechanics on Warhammer English Civil War. One of the ideas I got is his concept of the Demi-Sqn; sqns in his game mechanics always attack in pairs.

So in relation to BtLBv2 if I had sqns attack in pairs but in two ranks with a frontage of three figures each (total of six figures in the front rank and six figures in the rear rank) would this reflect the period visually and would the BtLBv2 rules work using this concept.

I am interested in hearing everybodies views on this.

I am thinking about basing my new Warfare figures (when I get them!) on three 60mm square bases, with two lines of four figures on a base and the pikes in the middle base. Will probably put a drummer and nco behind the two lines, still on the base. I am thinking about some free standing offcers to locate around the unit to indicate the unit's status, movement,etc. As I understand the rules, the actual number of figures on the bases or in the unit does not matter as long as you "pretend" that there are only 18.

Haven't thought about the cavalry, yet.
Top

I have been thinking about the question of the pikes, but on the other side

. Because the pikemen are only a game mechanism, I´m thinking about to use only three of them in a 60 x 30 mm stand.

But, about your question...

27 Infantry models is a BIG unit. Firing, you have no problem; using the "number of stands shooting", it doesn´t matter if you have 6, 7, 8 or 9 model in every stand, you count only the number of stands. But with a game strength of 27 models, your units are going to be harder to destroy by fire.

In melee, you need to consider the number of "basic combat elements": six models group? nine models group?. Again, your units are harder to destroy.

It is a question to test and test again.


I think that, as in any other good rulebook, BtLBv2 has well balanced mechanisms. If you change something so "basic" as the composition of the units, you need to revise all the other things. In my opinion, the actual unit, with 18/24 models, is very pleasant to see and there are a lot of models already!

About the Cavalry, remember that the "basic combat element" is the squadron but the casualties are counted by models. With so many musketeers, the squadrons need to be stronger than before.

I only use three pikemen on a smaller base, like you said it's only for visual effect, I did think of basing the pikemen on the command/centre base, but decided against that in the end, as I might not want to use pikemen for all my units all the time. The half stand pikeman base looks ok to me, her's a small picture. 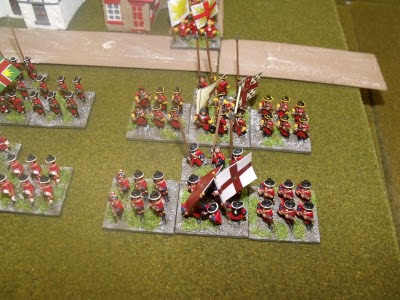 I think that looks fine Ray. Representing the pikes is important, how it is done is less important. I was never ever happy with the first attempts many years ago where 2 or 3 pikes were peppered amongst the battalions, it just looked untidy and not representataional of anything really.
"If you think you can, or if you think you can't, you are probably right"

If you look at the pictures of regiments in Front Ranks Gallery and on the inside cover of BLB2 Front Ranks display regiments are 5 bases with four figures. The center base has the pikes but only two

Like Barry says above it just does not look right. "I say, who are those two chaps in the back with the long sticks"

I think that, as in any other good rulebook, BtLBv2 has well balanced mechanisms. If you change something so "basic" as the composition of the units, you need to revise all the other things. In my opinion, the actual unit, with 18/24 models, is very pleasant to see and there are a lot of models already!

That's good advice Juan, thanks. And I agree BLB2 is a excellent rule set and book.

The second COA and one closes to BtLB's regiment design is three bases with the center base having the pikes with the flags. With the 60x60 base it may be possible to put a fourth pikeman on.

Of course with the fourth stand of pike behind the center base it allows the option of removal for gaming the Spanish Succession.

I don't know what is about the Spanish Succession - to me it's just like the Seven Years War without all the fancy marching, uniforms and Free Corps, boring. I think I just heard Ray aka "Churchill" fall off his chair.

) in the dismounted role.


Barry has also stated that the 3 pikemen base at the rear of the centre command base is only a visual representation incase the battalion is charged by cavalry.In such cases the "Pike" base is moved to the front of the command base.
I don't see what the problem is with only having this extra rank of pikemen.

I don't think there is a problem with this either. My comments ref the Front Ranks repersentation for me has to do more with the frontage/dept and ratio of the pike in the battalion.

IIRC there are Blenheim tapestries that show formations in the background with what looks to be pikes.
Captain of Dragoons
Top

I have modified some rulebooks for my local club in these years so, now, I am very careful with the balance of the rules.

I am collecting my units in the same way than Ray, exactly! and I like the look of his pikemen.

As you say, to put the pikemen in the center stand is to maintain them always with the unit. I am sure that, sometimes, I´m going to use only the musketeers (in assaults, in North America, etc.) so I prefer to have a separate stand of pikemen because I gain flexibility.

About the War of the Spanish Succesion, besides the colorful flags of the English Army, it is posible to see the evolution of the Armies that fought in the Boyne (by example): fire of the Infantry by platoons, Cavalry charges by the sword, more importance for the Artillery... Another step in the modernization of the Art of War. One of my friends always said that all the wars in the XVIII Century are the same, but you are not able to use the same tactics in all of them.

I think that only the Spanish and Portuguese armies had pikes, at least until 1703. On the other hand, this War was not limited to Flandes or Baviera (Bavaria); there were many battles in the Spanish soil, and some of them were not successful to the English Army...
And, finally, Louis XIV was able to put a Bourbon in the Spanish throne, Felipe V (what was the objetive of this war?).
Last edited by Juan Mancheño on Thu Aug 04, 2011 7:34 pm, edited 1 time in total.
Top

IIRC there are Blenheim tapestries that show formations in the background with what looks to be pikes.

I would be interested if you could point them out, I've got copies of the de Hondt, Le Clerc, De Vos and Van der Borcht tapestries and the closest I've seen a pike is in Alan Wace's book 'The Marlborough Tapestries' where he describes in the Wynendael Tapestry, page 80 that the British convoy is escorted by musketeers and pikemen. The only figure you can see is a figure that looks like an officer with a half pike and certainly not pikemen. The fact that Wace was a specialist in the department of textiles in the V&A museum it's not surprising he got it wrong.
Cheers
Dave
Top

I think it was a Blenheim tapestries. I remeber seeing it on a internet link but it was four/five years ago.

I believe that the link was part of a discussion on the old Yahoo Blenheim Group. A group of wargamers that refought Bleheim in 2004 and Ramillies in 2006.

the part that shows Tallard in Marlbrough's coach after his capture definitly show pike blocks, but it could be artistic licence to get a prespective of distance.

Captain of Dragoons wrote:Hello Dave
I think it was a Blenheim tapestries. I remeber seeing it on a internet link but it was four/five years ago.
Edward

Just had another close look at the Blenheim tapesties but can't see anything that resembles a pike unit the only thing standing above the infantry are stands of colours, but perhaps it's my aging eyes?
Cheers
Dave
Top
Post Reply
31 posts