OK, so after two years I've finally given in to having a section of the FORUM specifically set up to discuss painting techniques, display examples, show your latest projects and chat about this vital part of the hobby. Manufacturers please feel free to post up your sculpts, ask questions about what the gamers are after and generally promote your work.. no charge! Painters, please also feel free to post up your work for comment and critique. I can't promise the unreserved adulation characteristic of some other fora but I would hope you'd get constructive and measured comment!
Post Reply
364 posts

After getting some encouraging words...

Part IV/1. - The condition before the Reorganization 1810

This phase of the Saxon Army was by far the most exiting one.
While on campaign four Officiers started independently, in almost the same words, to write to the Minister of War v. Bose.
They stated the problems and grievances of the Army in the Field, pointing out what troubles this old system gives them when compared with the french system.
This four men were deployed in different places:
Gen.Mjr. v. Gersdorff, Generalstaff Grand Duchy Warsaw

While the first three officers wrote on their own accord Col.v. Langenau had direct orders from the King to write about his experiences of the Campaign 1809. What he wrote only confirmed what the other three allready had pointed out and showed the need for sever reforms and reorganisation of the Army in its current condition. Soon after the arrivel of v. Langenau's report Gen.Adj. v. Gersdorff was ordered by the King to put together a proposal for the Reorganisation. Before the end of 1809 this proposal was ready. It was a Masterpiece of historical and Military-Science importance.


Thank your for your patience

Part IV/2 - The Proposal in detail

The foundation of the Reforms are characterized as follows:
- The Saxon Army should have a war strenght of 31.000 men
- Stronger bodies of troops for tactical use are to be preferred over weaker bodies
- For easier crossover from Peacetime to Wartime establishment the Troops are to organized allready in peacetime into permanent Divisions
- To put the spending for the army in relation with the income of the State
A Commission approved only with marginal alterations the Proposal and it was decided to put into action with May 1st. 1810

Elaboration:
Cavalry - In numbers the Saxon Cavalry was considered to be strong but the single Regiment was thought be to weak with only 666 men. So it was decided to disband one regiment to strengthen the others to get 718 men each. It was decided to dissolve the Carabiniers as there was enough heavy Cavalry.

Infantry - As the Regiments were considered to be to weak 4 Regiments were disbanded to bring the others in strength from 1754 up to 2073 men each. The 'Schuetzen-Battalions' were used as cadres for the 2 new to be raised Light Infantry Regiments with 1652 men each. The so far provisional Grenadier Battalions were now made permanent. A Jaegercorps should be raised in strenght of 174 men.

Training - As learned in the hard lessons of 1806, 1807 and 1809 the inflexible linear tactic was abolished and replaced by the french coloumn tactic with Tirailleur Swarms.

At the end of the Year 1810, after only 8 month the Reorganization of the Saxon Army was finished. For the first time since its existence the Saxons felt that they could be proud of this new and beautiful dressed Army.

That ends this part of how the Reorganization of the Saxon Army 1810 was done.

Thanks for following so far.
All questions are welcome

...I'm hanging on every word Günter.
In enterprise of martial kind, When there was any fighting, He led his regiment from behind -
He found it less exciting.
http://worldcrisisinminiature.wordpress.com/
Top

Friends and Followers of this thread,

here are glimps at how the forementioned Chevaux Legers/Ulans are sold:
Seperate Heads, Swordarms/Lancearms, Carbine and with a suitable horse. Trumpeters carry their instrument on the back holding a weapon in hand.

After the stresses of Salute and some other private matters my sculpter took up the 'knive' again and resumed his work.
While asking him about the last part of Infantry to do, the Leib Grenadier Garde, he told me the following:

Thank you for your email. I will look into those. I wonder if I could use bits of the french old guard for them? I will check it out. On a different note, artillery is coming along nicely. The cannon carriage is virtually complete, as is the limber. I need to do the gun barrel for the 6pdr and 8pdr howitzer. I am very pleased with them. The caison is 50% complete and they should all be ready for mould making in June. I will keep you informed of progress. Thank you.

Btw., the Leib Grenadier Garde will be done in Parade dress uniform as it is the most colorfull.

I proudly present you my first finished 7 Saxon Line Infantry Battalions. The Units presented are
"The Red Brigade" Regiment König, Regiment Niesemeuschel and
Grenadier Battalion v. Brause.
" The Blue Brigade" Regiment Prinz Anton.
Accompanied they are by their future Brigadier Generals.
The remaining units of the Blue Brigade are arriving within the next days. Then I present the full division (without Artillery) including the Divisional Command.
Here are the pictures. Enjoy! 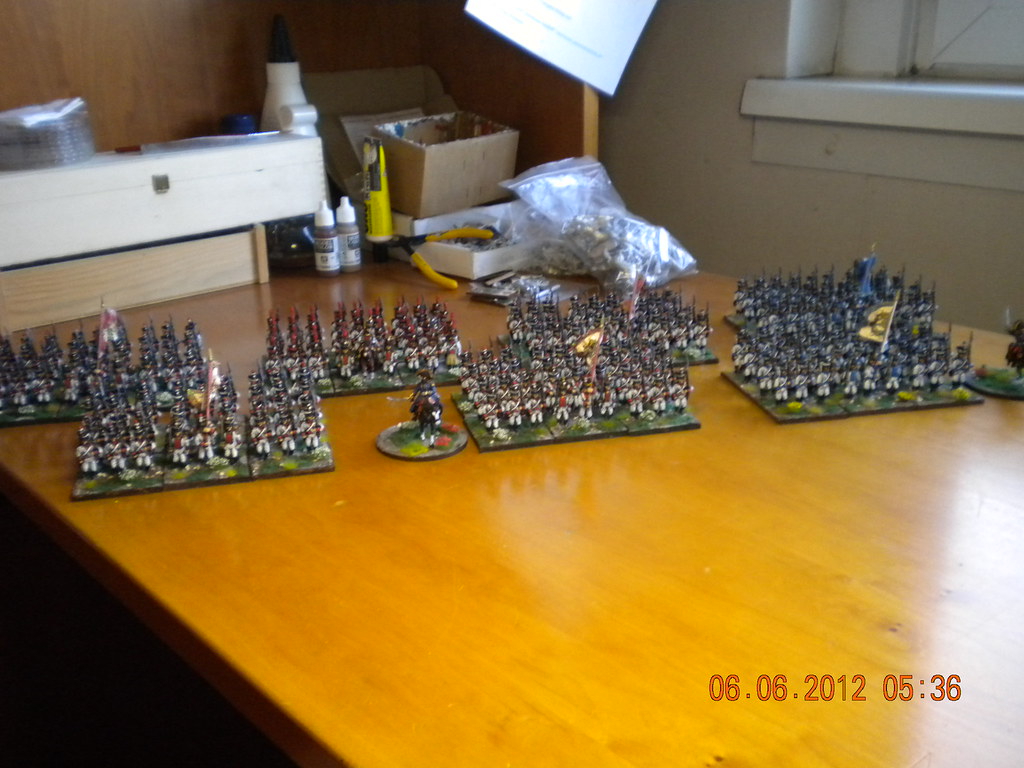 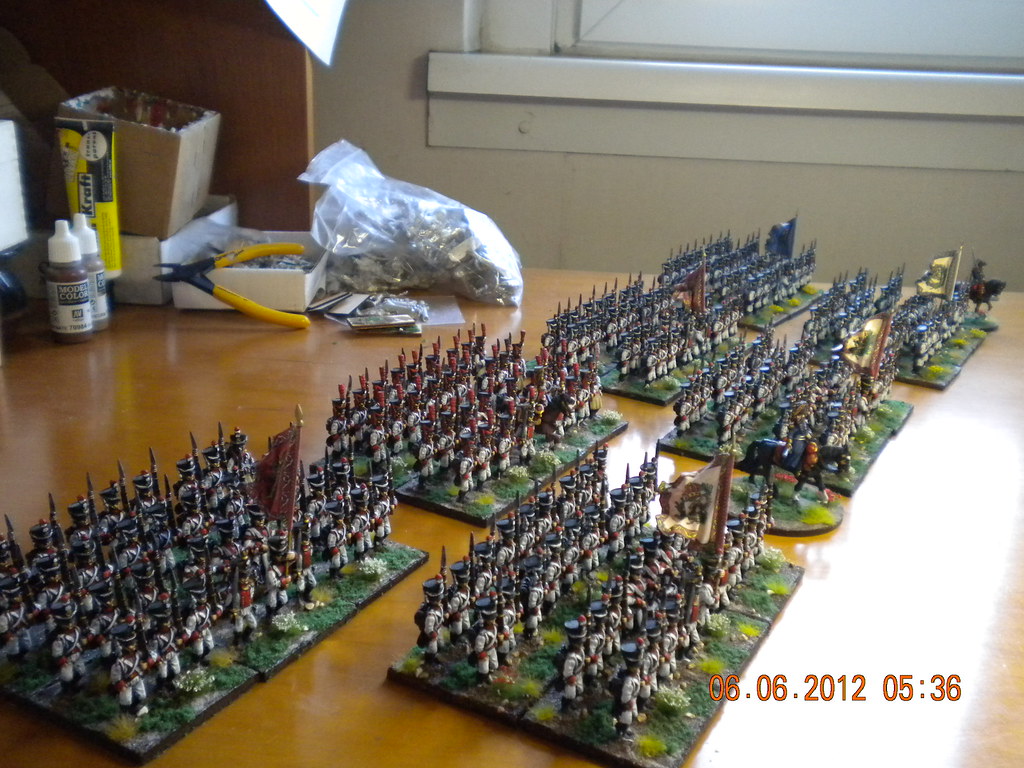 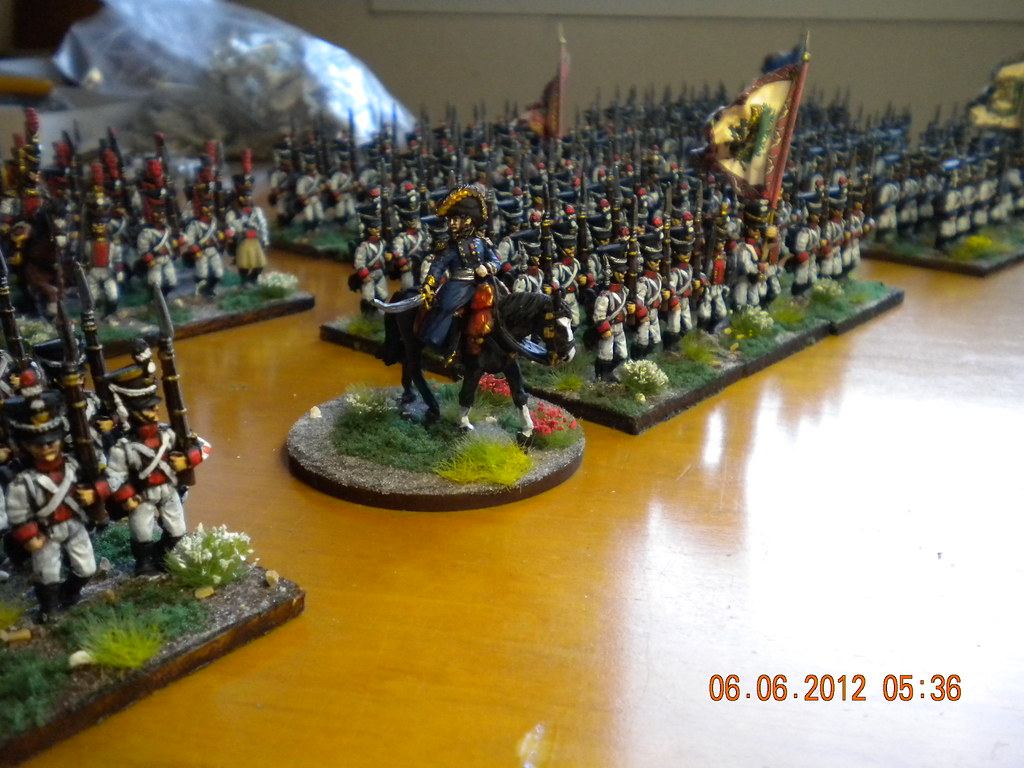 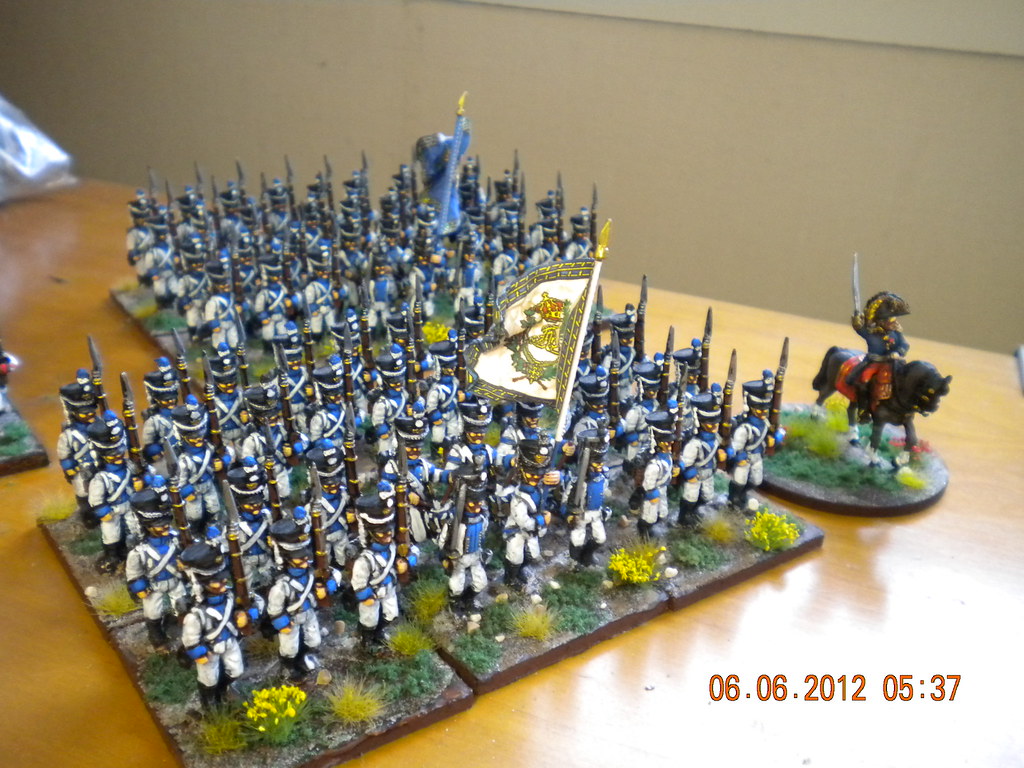 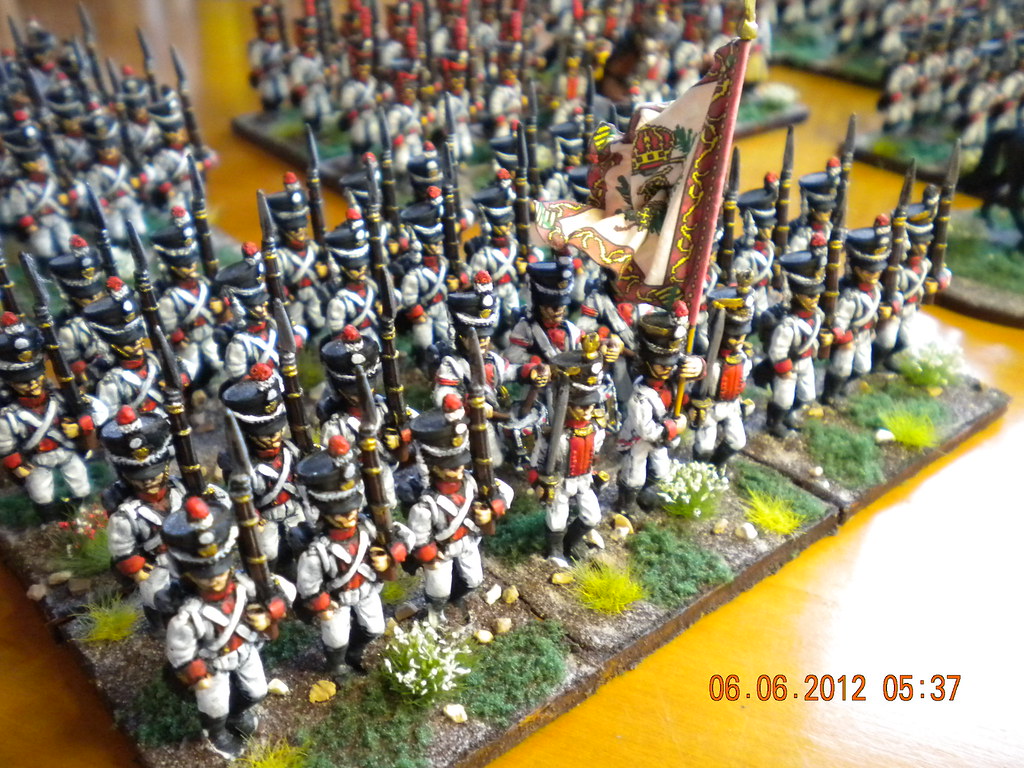 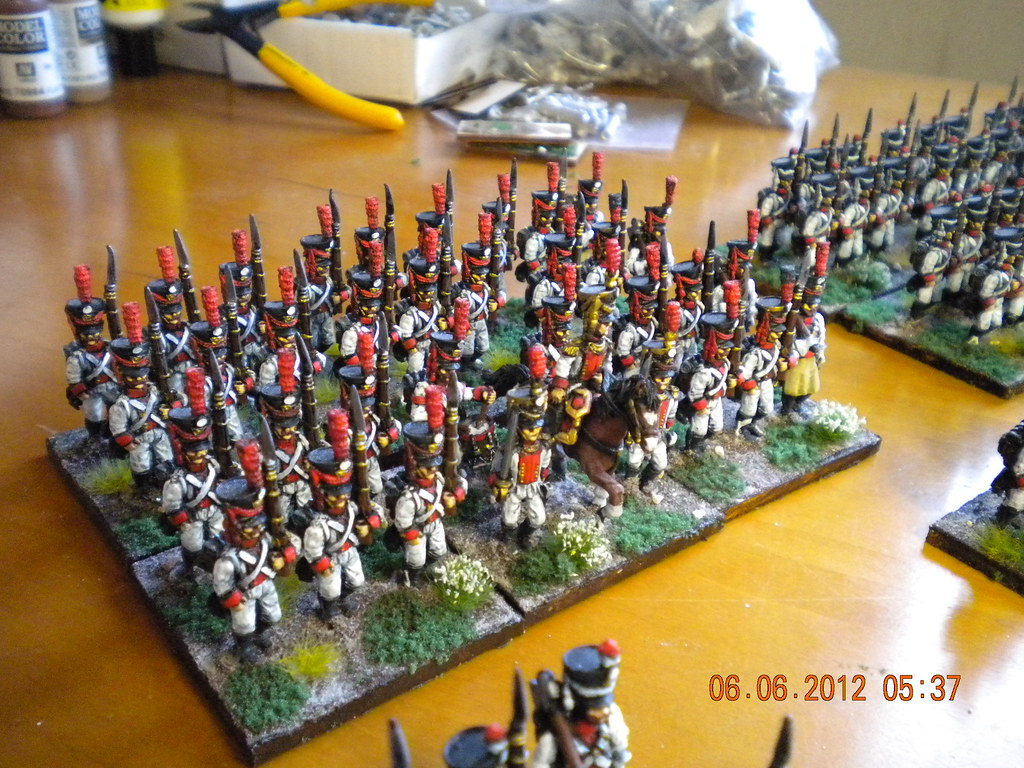 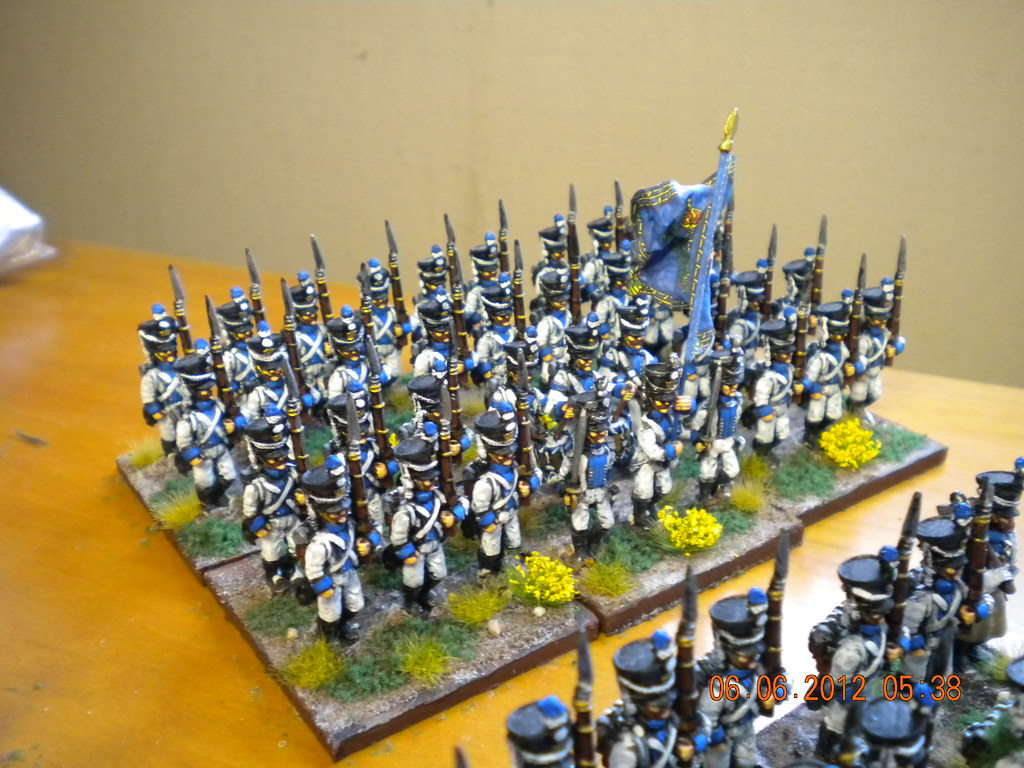 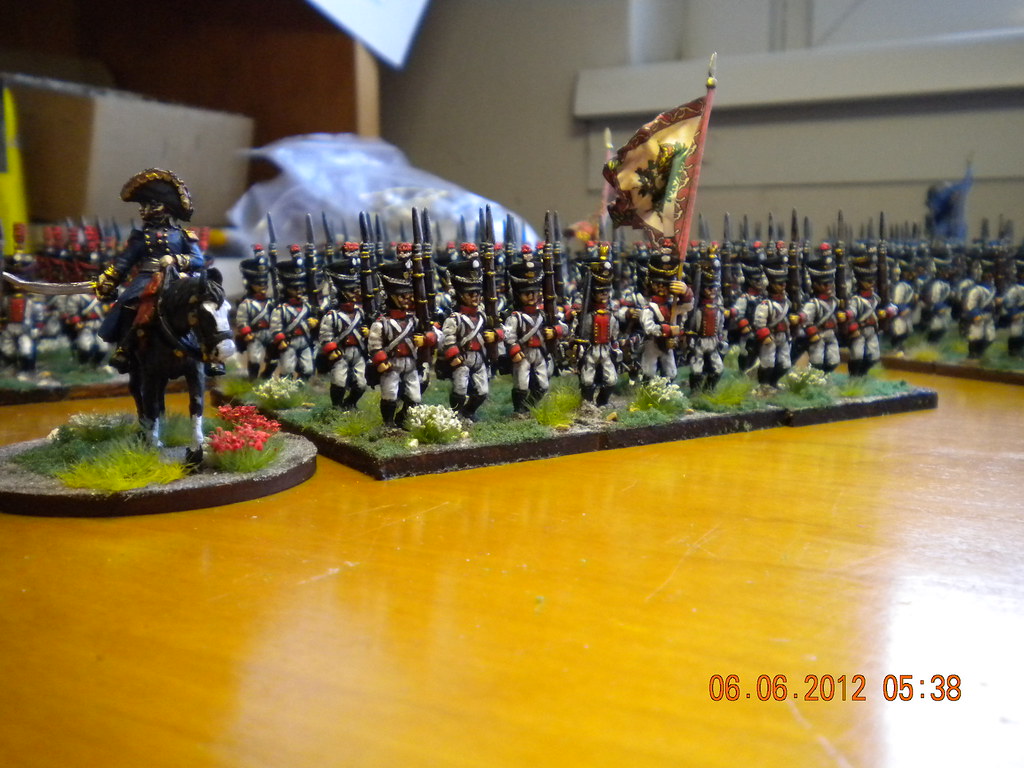 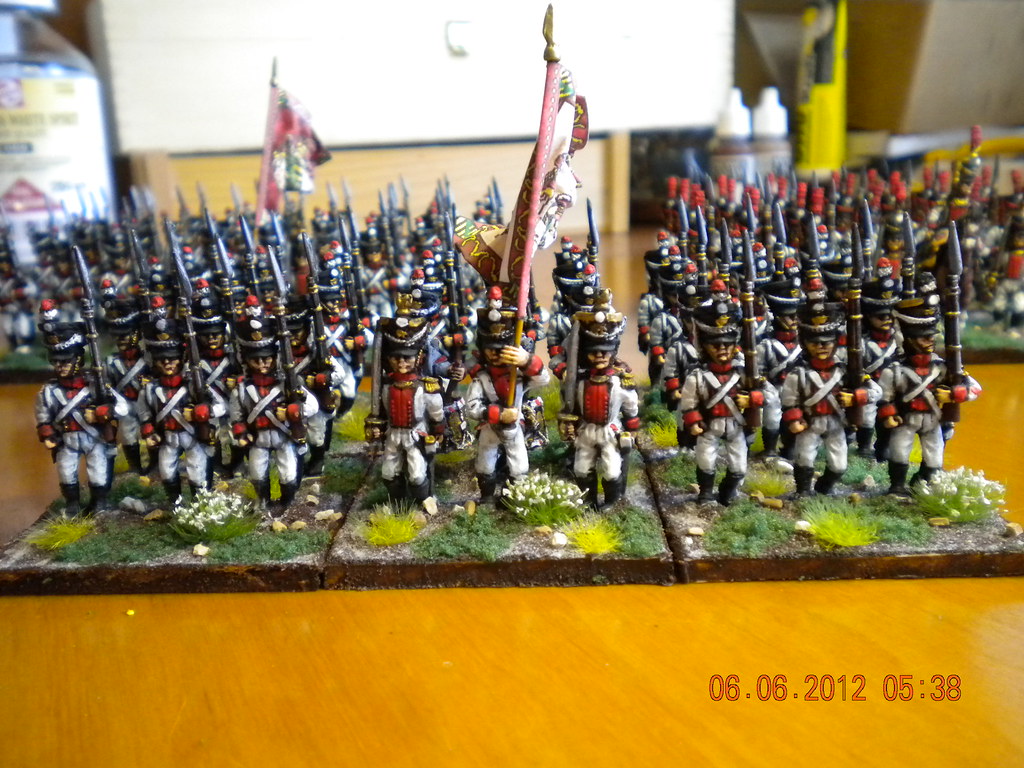 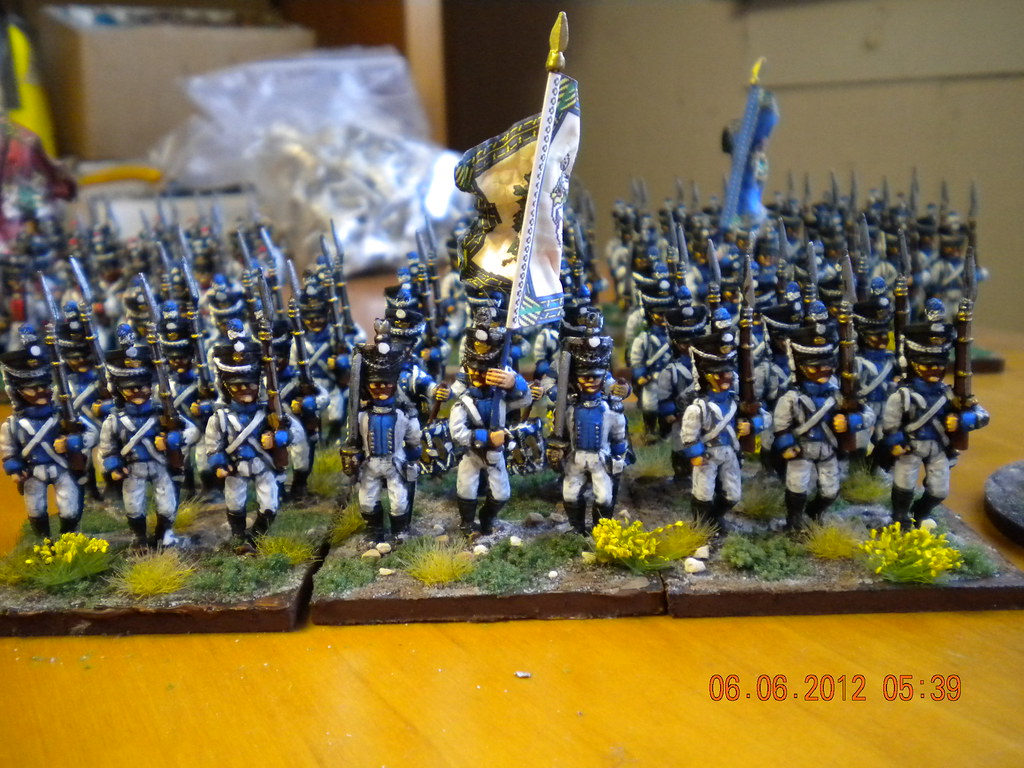 All Figures but the Officers, who are Perry's, are made by Steve Barber. Painted by Neil Wilson. Flags are from Flagdude.

Thank You to Barry, Brice and Burkhard who have been so kind to share their way how to do the basings. It helped me alot.
Last edited by Friedrich August I. on Fri Aug 18, 2017 4:12 am, edited 2 times in total.
„Macht Euch Euren Dregg alleene“

I'll bet you can't wait to get a game with them!

That's a fine looking force you have Gunter and it would be good to see them out on the battlefield, you have just got to love those white uniforms.
Cheers
Dave
Top

obriendavid wrote:That's a fine looking force you have Gunter and it would be good to see them out on the battlefield, you have just got to love those white uniforms.
Cheers
Dave

Dave,
white uniforms are my speciality

and my Westphaliens are gonna be as 'white' as my Saxons

They look beautiful. I hope my 1806 Saxons can look at good as these.

They're very nice! Keep it up. The bases are especially well done.
With Gen'l Custer Down in Mexico: Yes, one of the goals is to see how many times one can get him killed.
Top

Wonderful Gunter. They look particularly impressive en masse.
"We shall attack across the minefield, under cover of daylight!"
Top

Gunter my dear friend! I am sorry that I missed this most excellent post of those mightily handsome regiments from a REAL German State! The force looks fantastic. Basing, flags and composition really set off the regiments. You MUST arrange to invade England with them!

My only excuse for not joining in the thread has been 18 hour days, demanding clients and air travel! Today after coming off the plane from Doha my earnest desire was to lie down and watch an old movie and fall asleep. Alas, a dream as remote as Alan Cuggy throwing a 6 on a DAverage

My exciting life is spent on the phone, filling in bid documents and sorting out the private lives of my flock

Maybe they will see some action in Derby next year,they deserve to be blooded in style.

Cheers
Bob
We are not retreating - we are advancing in another direction. Macarthur, Douglas
Top
Post Reply
364 posts